Mngxitama: Current looting and riots a ‘dress rehearsal’ for ‘civil war against whites’

The BLF leader believes the black majority will ultimately come to blame the white minority for why they exist in a state of poverty, and then 'the implosion will happen'. 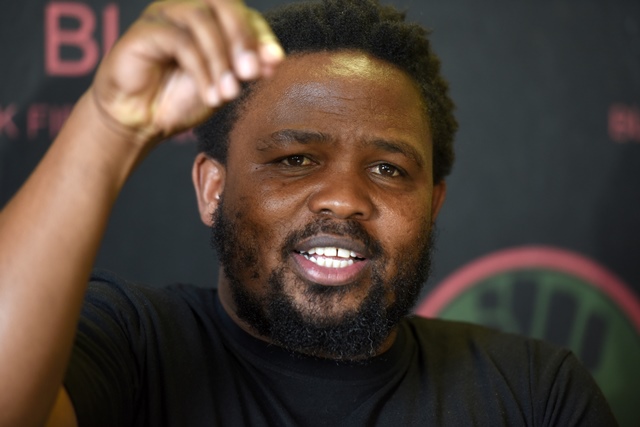 In correspondence with The Citizen on Tuesday, leader of Black First Land First (BLF) Andile Mngxitama, commenting on ongoing attacks on foreigners in South Africa, said: “One day we [will] turn it against whites. Just you watch.”

He was asked to clarify this comment, which overlapped with another controversial statement on Twitter on Tuesday night by EFF leader Julius Malema, who called on black South Africans to redirect their anger at “white monopoly capital”.

Mngxitama – who is currently dealing with a hate speech case brought against him by AfriForum for his public declaration last year that five white people should be killed for every black person should a taxi war ever break out – said that he was not calling for “the apocalypse to befall the white community”, but was warning that it’s apparently on the cards.

“The current apocalyptic scenes of charred buildings and carcasses of motorcycles eaten by fire is a mere dress rehearsal of an eventuality awaiting white South Africa,” he told The Citizen.

“The violence is currently black centred, but its source is in fact the structure of South African economic apartheid. This structure was created by white people under apartheid and continued by black political leaders who are bought by the same white money.”

His comments echoed those of Malema’s, with the EFF leader saying the ANC was “protecting … white monopoly capital”.

EFF opponents AfriForum called Malema’s comments “racist incitement”, after Malema called for “African brothers and sisters” to rather direct their anger at the “owners of wealth … white monopoly capital”.

Mngxitama, who is highly critical of Malema and his former party the EFF, said that the current riots in South Africa were incorrectly termed xenophobia, when it was instead a “black-on-black war”.

“This black-on-black war, incorrectly named xenophobia, saw a wave of violence in 2008 on the wake of which 63 black people were murdered. Since then, every three years or so, a wave of this violence flares up with increased intensity. The cycle is getting more regular in tandem with periods of heightened economic hardship. But these cycles are also getting bigger. It’s just a matter of time before they transgress into the secured white zone and enact an anti-colonial civil war of blacks marauding hordes as anticipated by JM Coetzee in his memorable novel Waiting for the Barbarians.

“The current waves of violence are driven more by secondary contradictions generated by the main contradiction, which remains out of the purview of the angry mob. As more black people can’t put food on the table they turn to their ‘outsider’ black neighbours, with whom they are competing for the crumbs that fall from tables of those who have in fact created these hardships. The white community is totally oblivious to the fact that there is a direct correlation between its comfort and the conditions that turn swathes of blacks into warring hordes.

“Reports show that over 200 truck drivers murdered each other in a period of a year. They are killing each other in competition over driving jobs which are increasingly given to non-South African drivers because they can pay this ‘foreign’ labour force lower wages. The South African marginalised driver takes out his anger on the ‘foreign’ driver, not on the employer who has pitted him against his brother from across the Limpopo. Again there there is a short distance to the realisation of what the main source of this suffering is.

“The white community is secured in its belief that the black political leaders whom it has bought to provide it with security has the black masses under control. This is cold comfort. The coming black rage, when it implodes into the white community, shall not heed the sweet talk of the overfed politician clad in Louis Vuitton from toe to head.”

He theorised that it would be “just a matter of time before the blacks who are torching the various CBDs come to the realisation that hit Steve Biko back in the 1970s”.

“Township life alone makes it a miracle for anyone to live up to adulthood. There we see a situation of absolute want, in which black will kill black to be able to survive. This is the basis of vandalism, murder, rape and plunder that goes on while the real sources of evil – white society – are sun-tanning on exclusive beaches or relaxing in their bourgeois homes.”

Mngxitama said Biko had put “his judgemental finger on the collective white community” and associated its comfort with the “absolute want” that turned black people into self destructive social beings.

“The problem is that black people are thinking beings and, like all people, are likely to connect the dots.

“This is a warning about a situation which is inevitable so long as the conditions exist that give rise to this eventuality. We await another petrol hike in a country where 10 million are without jobs. The conditions for a civil war are in place. It’s just a matter of when the implosion will happen. The dress rehearsal is almost done; the time when the show will be staged in a larger theatre is imminent.”

Last year, President Cyril Ramaphosa suggested Mngxitama should be thought of as a “lone voice in the wilderness”.

He added that, in his view, most South Africans were generous and kind. He said the project of nonracialism remained “the best project” in the country and it should never be abandoned in favour of hatred and division.

Ramaphosa added that the hatred and racism of a few people could not allow society to characterise all people in a generalised pejorative way.

“We cannot as a nation be reduced to what people who are filled with hatred in their hearts are saying. We are nation builders…”

Ramaphosa said the lessons of former late president Nelson Mandela should never be forgotten and that racists needed to be isolated and shown the error of their ways.

The BLF, for its part, has called on parliament to remove Ramaphosa as the president for, among other things, how his CR17 campaign funds were handled.

The BLF was deregistered by the IEC as a political party earlier this year due to their policy of not allowing any white person to join them. The IEC found this went against the constitution.