The DA will sit for its first of two crucial meetings on Friday that could change the shape and direction of the party going forward. 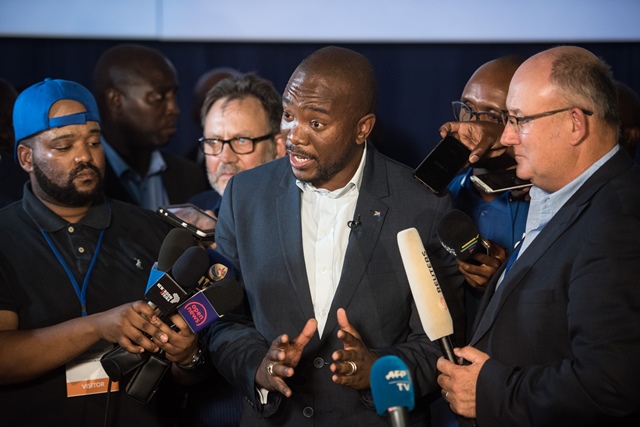 The federal executive, seen as the highest structure outside of a federal council, is expected to meet in Cape Town in a bid to discuss the upcoming council meeting set for next weekend.

News24 understands this is also where party members aligned to leader Mmusi Maimane are hoping to win the first round of a fierce battle around a report from a review panel looking into the state of the party.

The report was commissioned by Maimane following a lacklustre showing at the polls in the May general elections. Some leaders within the federal executive say they expect to see a “scathing” report on the state of the party and Maimane’s role as leader.

Several leaders at both provincial and national level discussed some of their expectations with News24, with many saying the greatest showdown will be the battle between federal chairperson Athol Trollip and former leader Helen Zille who announced her availability to run for the role of federal council chairperson last week.

The epic battle will be one of many between the two.

“Whoever takes this thing, let me tell you it will be tight,” a national leader, speaking on condition of anonymity, told News24.

About 150 to possibly 200 delegates will be casting their votes next week for the critical role, often described as that of the political CEO of the party or likened to the ANC’s secretary-general position.

The national leader said it would have been easier to guess which way the votes would go if it was just the federal executive, which backed Maimane and Trollip. However, the source said there would be no telling how it would go now as numerous party members would gather for the federal council next week.

The Western Cape, KwaZulu-Natal and Gauteng are set to bring the largest delegations, including leaders, caucus members as well as council and regional representatives, with all three of these not being seen as giving a solid backing to their leaders.

“You know those three provinces are hard to read, there is always an area that’s defiant when it comes to listening to their leaders, so there is no guarantee when it comes to calculations in such scenarios. Remember in the DA people vote as individuals,” continued the national leader.

Another national leader said the odds were 50/50 on both the review and battle for federal council chairperson.

“The biggest thing for us will be congress. If that review says anything about an early congress then best believe it will be a heated debate,” said the insider.

The second source told News24 even those in support of Maimane were keen on an early conference because they believed they had the numbers to ensure he gets another win and to defeat the so-called “liberal bloc” or “1959 committee”.

The “1959” refers to the establishment of the Progressive Party that year, which is regarded by the 1959 committee as a throwback to the “true liberal values” of the party.

In terms of the race between Trollip and Zille, this leader also said it was difficult to read some of the party’s large provinces.

“We know Eastern Cape is solid behind Athol, even though there might be a rotten apple here and there, but he commands respect, I can’t really say the same for [Bonginkosi] Madikizela in the Western Cape,” said the insider.

The second source said it was harder to read because the “1959 committee” faction populated the metro region and would make up around 60% of the delegates from that province, while Madikizela did not seem to have enough command of the entire province.

While some believe Mike Waters might withdraw at the last minute to avoid splitting Zille’s chances of a comeback, Thomas Walters remains an unknown for many. The source said Walters saw himself as a “third-way”.

“He genuinely believes he has something to offer, especially for people who don’t want to see Helen come back and those who feel Trollip is a bully, is abrasive and has terrible personal relationship management skills,” said the national leader.

A provincial leader, who is backing Trollip and worried about the impact of the review on Maimane, said it could have an adverse impact on the DA’s coalitions, and more so on its informal relationship with the EFF.

“You must have different forces. Coalitions are the future of politics and we can’t run away from this fact. It’s happening in Europe. If they fault us for the breakdown with the EFF, and there are talks about severing all ties because of ideology, then we can make the same point about the far-right FF+,” said the provincial leader.

The same provincial leader added there were concerns that if Trollip returned to the helm as mayor of Nelson Mandela Bay, where incumbent Mongameli Bobani is facing increasing pressure to step down, this would be used against him in the federal council.

Another provincial leader told News24 there was a great need to stabilise the party, saying the status quo could not continue.

The party insider said there was a need for a coherent message from its leaders and a greater need to focus on the interests of voters.

“We can’t continue being inward-focused. The sooner this stops, the better it is for our party.”

This source said the DA believed Trollip was the only leader who could rise above party politics to set the second-largest party in the country back on course.

“I was actually disappointed to see Helen [Zille] emerging, no one disputes her rights to contest but most of us had accepted she was done with active politics.

“When she emerged, I must be honest I was shocked, completely taken aback and I won’t suggest for a minute that she can’t do the job, but I believe Athol has the vigour and knows the ins and outs of the party in its current state and can steer the ship,” added the leader.

Maimane has dug his own grave

While various leaders, who spoke to News24, wanted to retain the essence of the DA in its current form and were willing to fight to ensure it remained appealing to the country’s black majority, many seemed to have less hope in Maimane as a leader.

“He dug his own grave, we told him. Many of us warned him and said you have surrounded yourself with wolves,” a third national leader told News24.

This senior party leader said Maimane had to figure his own way out of the mess he had created, which has seen him at the centre of numerous scandals that was reported on in various weekend newspapers.

Maimane has also been reportedly asked to consider stepping down by the review panel, even before the report was officially tabled.

“Mmusi like many of us as blacks have taken a gamble on the DA, based on our beliefs,” said another provincial leader. “I take great exception to the attacks against Mmusi. If it can happen to Mmusi it can happen to any of us.”

But the leader said Maimane had made a series of mistakes and questioned why he had failed to consult more leaders before appointing a review committee made up of three white males.

“I am angry cause he failed to consult. He can take decisions but should have left the black door open. How did he decide on an all-male white panel,” questioned the leader.

Whatever decisions are taken this week might give an indication of what is to come when the DA finally sits for federal council on October 18, with many warning that if the country and the party’s interests are not put ahead of factional interests this could be the beginning of the end for the party.