The curse of the DA’s metro mayoral class of 2016

The wave of change the DA caught in 2016 fizzled out by 2019 and De Lille, Mashaba, Msimanga and Trollip no longer wear the mayoral chains they held when the dust settled on the horse-trading after the 2016 elections. 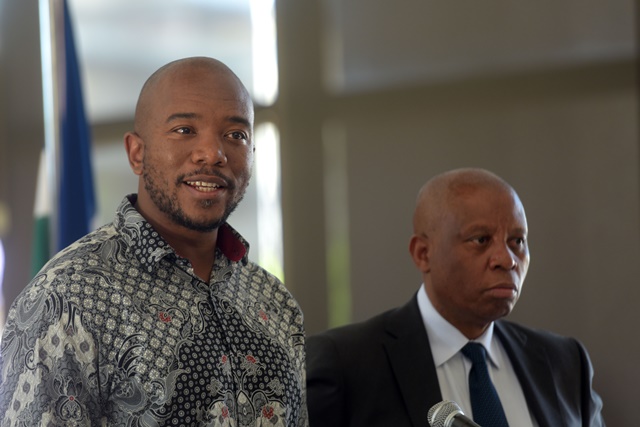 Herman Mashaba together with then DA leader Mmusi Maimane address the media at a press conference at the Johannesburg city council, 21 October 2019. Picture: Tracy Lee Stark.

When Herman Mashaba announced his resignation as DA councillor on Monday morning and therefore mayor of Johannesburg, it meant that none of the four mayors who took the reins of the four metros the DA governed after the 2016 election – albeit with a little help from their friends in three cases – will serve a full term.

In the heady days after the 2016 municipal elections, phrases like “coalitions are the future” and “political realignment” abounded.

Change was in the air, and the party poised to benefit the most from this was the DA.

With Mmusi Maimane leading the party into an election for the first time, they campaigned hard and told all and sundry that they could add the metros of Johannesburg, Tshwane and Nelson Mandela Bay to that of Cape Town, which they have governed since 2006.

In Cape Town, incumbent mayor Patricia de Lille – or Aunty Pat as she is mostly affectionately known in those parts – was the DA’s candidate, in Johannesburg it was maverick self-made millionaire Herman Mashaba, in Tshwane Solly Msimanga, regarded as a rising star in the party, and in Nelson Mandela Bay party stalwart Athol Trollip.

Apart from Cape Town, where the DA won an outright majority, coalition agreements followed and a loose arrangement with EFF who said it would not go into coalition but would support the DA-led coalitions to keep the ANC out of the government.

But the wave of change the DA caught in 2016 fizzled out by 2019 and De Lille, Mashaba, Msimanga and Trollip no longer wear the mayoral chains they held when the dust settled on the horse-trading after the 2016 elections.

Athol Trollip was the first to go, in August 2018. Earlier in the year, EFF leader Julius Malema vowed to “cut the throat of whiteness” by removing Trollip as Nelson Mandela Bay mayor to exact his revenge on the DA for not supporting the EFF’s motion in the National Assembly that the Constitution should be amended to allow expropriation without compensation.

Meanwhile, Trollip’s relationship with coalition partner the UDM broke down over ousted deputy mayor Mongameli Bobani, with the DA claiming Bobani is corrupt, and the UDM accusing the DA of arrogance.

Trollip survived several motions of no confidence until one of his councillors turned on him and the DA and voted with the ANC, EFF and UDM to remove Trollip and elect his nemesis Bobani as mayor.

Trollip now leads the opposition in the council.

With De Lille’s face on their election posters, the DA won the 2016 municipal election in the city with a two-thirds majority, a fact she often mentioned in the strife that was to follow.

On October 31, 2018, she officially resigned as mayor of Cape Town after a long and bruising battle with the party.

The DA accused De Lille of poor management and turning a blind eye to irregularities, while she accused a clique opposed to transformation – particularly with regards to spatial transformation – of a dirty tricks campaign against her.

She was replaced by Dan Plato and subsequently formed her own party, GOOD, which won two seats in the National Assembly. President Cyril Ramaphosa appointed her as public works minister.

He was the DA candidate for premier in Gauteng for the 2019 elections, and said he wanted to focus on campaigning for this position.

However, there were claims that he was pushed out of the City by the DA due to unsatisfactory performance and endless scandals, including the multibillion-rand GladAfrica scandal and the hiring of unqualified staffers in his office.

He was replaced at City Hall by Stevens Mokgalapa, and after the election, he became the leader of the opposition in the Gauteng legislature.

On October 21, 2019, Mashaba announced that he would resign as mayor effective November 27 as the election of former leader Helen Zille as chairperson of the DA’s federal council signalled a “victory for people in the DA who stand diametrically opposed to [his] beliefs and value system”.

“I cannot reconcile myself with a group of people who believes race is irrelevant in a discussion of inequality and poverty in South Africa in 2019,” said the former chairperson of the Free Market Foundation who was hailed as a hero by Maimane a few minutes later.

While the EFF took some convincing to back Mashaba in 2016, by the time he resigned, they cosied up to him, so much so that some in the DA complained that he panders to the red berets.

Against this backdrop, allegations emerged that the EFF benefited from a R1bn fleet tender awarded by the City.