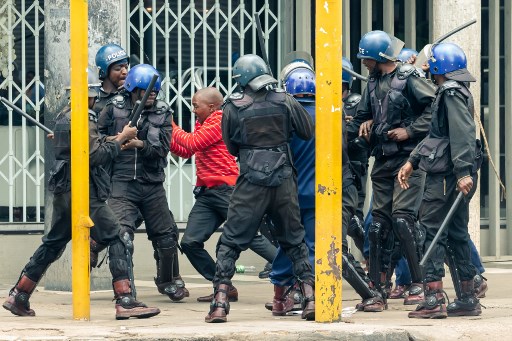 Anti-riot police in Zimbabwe beat a man with their baton sticks as they dispersed a crowd gathered to hear an address by leader of the MDC (Movement for Democratic Change) Alliance, Nelson Chamisa, at Morgan Tsvangirai House the party headquarters, in Harare, on November 20, 2019. Picture: Jekesai NJIKIZANA / AFP

As Zimbabwean police clamped down on the opposition party MDC, the DA condemned the “legitimisation of strong man politics by International Relations and Cooperation Minister Naledi Pandor”, who in a recent answer to a written parliamentary question said South Africa “unequivocally stand in solidarity” with Zimbabwe despite alleged human rights abuses.

DA MP Mat Cuthbert asked Pandor what the South African government’s position was on the economic sanctions placed on Zimbabwe by the US and European Union (EU), whether it supported a human rights-based foreign policy and whether the government stood in solidarity with the Zimbabwean government despite its alleged human rights abuses.

“Our stance toward Zimbabwe’s economic sanctions is primarily guided by the positions of the Southern African Development Community [SADC] and African Union, which calls for the immediate lifting of sanctions imposed on Zimbabwe by the US and EU,” Pandor in the answer that was distributed on Tuesday.

“South Africa’s foreign policy is premised on the observation and respect for human rights and this also guides our bilateral engagements.

“South Africa’s developmental aspirations and future are inextricably linked to that of the southern African region, as such South Africa unequivocally stands in solidarity with all SADC member states, including Zimbabwe. The UN Human Rights Council remains the UN’s mandated body to promote and protect human rights globally, not unilateral states’ decisions.”

On Wednesday Cuthbert said this negates the human rights-based foreign policy approach that has been adopted by the Department of International Relations and Cooperation in recent history.

“This is an explicit admission that Minister Pandor is not interested in the fact that daily abuses of power such as violence towards civilians, suppression of the independent press and electoral fraud are meted out by President Emmerson Mnangagwa.”

He said it appears that South Africa’s foreign policy is underpinned by hostility to property rights in favour of crony state economy and violent repression.

“This should not be the case as South Africa’s constitution is underpinned by the rule of law and democracy. Most disturbingly, it signifies an intent by the Minister to adopt an approach that is more favourable towards the National Democratic Revolution as opposed to the National Development Plan – which is in clear contradiction of national policy.”

He said the DA will not stand by while the government “throws its lot in with the strong men of continental politics”.

“Rather, we will continue to pursue an economic agenda that places human rights at the core of our policy offer.”

He said the DA believes that South Africa and Africa needs strong institutions to support democracy underpinned by the rule of law, not strong men arbitrarily creating and applying laws to suit their personal agendas or facilitate corruption and repression.

“This is crucial in us restoring our image as a beacon of light to the rest of the developing world.”

Hundreds of supporters had gathered outside the headquarters in Harare of the Movement for Democratic Change (MDC) after the party was denied permission to hold a rally in the city’s Africa Unity Square.

Chamisa had been expected to make the address from the office balcony instead.

As the crowd danced to party songs blaring from speakers on the balcony, baton-wielding police arrived to disperse them.

An AFP correspondent saw a man with a bleeding gash on the head and a swollen arm after being hit with a truncheon as he left a food outlet.