Most 'right-thinking members of the ANC and the citizenry' know that 'these elements are engaged in a long-term project of state capture,' the veterans said. 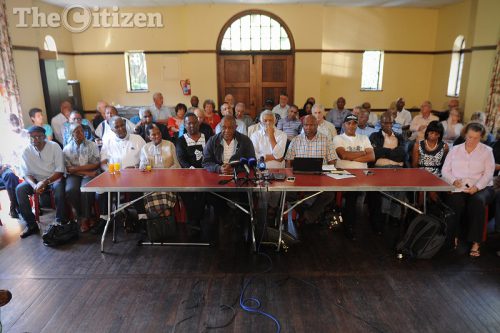 Placing Eskom under the aegis of the Department of Mineral and Energy Affairs is a less direct, but no less pointed, manoeuvre to undermine and politically weaken Pravin Gordhan, ANC stalwarts and veterans said on Wednesday.

“[We] are appalled at the utterances of those who have couched a political assault on Comrade Pravin Gordhan with insincere concern over the crisis at Eskom,” reads the statement, signed by 20 elders, including Wally Serote, Mavuso Msimang, Frank Chikane, Sydney Mufamadi, Cheryl Carolus and Aziz Pahad.

According to the elders, the true target of “those ANC politicians and their fellow travellers who are leading the attack [on Gordhan] is President Cyril Ramaphosa”.

“A convergence, or ‘unity’, of these individuals and organisations is indeed underway and is self-evidently designed to bring about the removal of a president committed to rehabilitating the country’s institutions and eliminating corruption.

“Mealy-mouthed affirmations of their support for the President are pure fluff. It is embarrassingly obvious that President Ramaphosa is seen as a placeholder by these parties. Their strategy is to progressively weaken him until he is ousted and the Eskom crisis is fertile ground for their machinations.”

The elders contended that the facts on Eskom were beyond dispute.

“Eskom has been fertile ground for patronage, massive corruption and political adventurism over the last two decades. Maladroit management and incompetent oversight has resulted in the utility being systematically degraded to the point where less than two thirds of installed capacity of 46 000 MW is available at any given time.

“A failure to perform even perfunctory maintenance has had the predictable consequence of compromising even this available capacity. In recent years, load shedding has become a constant operational feature, with the remaining capacity frequently unavailable due to deliberate and negligent avoidance of proper management of the power infrastructure.

“Eskom demonstrably sits at the centre of the economy and its degradation has a linear correlation with SA’s declining economic performance.”

The elders said that this was not in dispute was a “chilling signal that national assets are being misgoverned not only at Eskom, but throughout the SOE (state-owned enterprise) sector”.

“This is a deeper problem related to SA’s political culture and its form of government. This will have to be corrected if the country is to avoid the appellation of a failed state. Casting blame on and directing opprobrium at Pravin Gordhan for the state of affairs at Eskom is disingenuous and duplicitous.

“Eskom’s decades-long management failures were compounded by criminal state capture, aided and abetted by a range of ministers in Jacob Zuma’s disastrous administration, as well as a coterie of thieves appointed to successive boards of Eskom. Pravin Gordhan is not one of them.”

Earlier this week, Fin24 reported that the ANC Women’s League and National Union of Metalworkers of South Africa (Numsa) had called for the power utility to be reconfigured to the energy department after Eskom board chairperson Jabu Mabuza resigned, apologising because Eskom did not keep to its commitment to avoid load shedding until January 13.

It is currently under Gordhan’s leadership within the portfolio of the Department of Public Enterprises.

Most “right-thinking members of the ANC and the citizenry” know that “these elements are engaged in a long-term project of state capture and regard the Ramaphosa presidency as a necessary interval before they are once more in power”, the stalwarts and veterans maintained.

“We make common cause with those within and outside of the ANC who would resist this project. We call on President Ramaphosa to stand firm and refuse to bend the knee to those who serve with him in the NEC (national executive committee) and Cabinet who would steal from and cripple the state. There is no ‘unity’ to be had with them; their ignominious defeat is certain.”