Kgosi Maepa accuses the DA of not adhering to democracy as the speaker wanted to determine the agenda of a meeting she did not arrange or call. 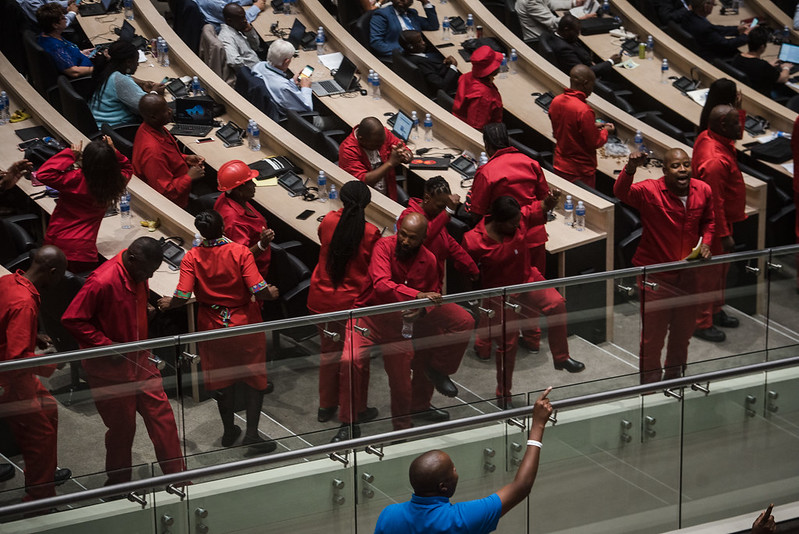 Members of the EFF can be seen protesting during the Council meeting at Thswane House, 16 January 2020, Pretoria. Picture: Jacques Nelles

Tensions reached boiling point as the EFF and ANC staged a walkout from a special council meeting after speaker Katlego Mathebe refused to recuse herself or allow them to determine the sequence of items on the agenda on Thursday.

Council got off to a chaotic start as tensions were already high when the parties entered the council chamber for the special council meeting to discuss the motions of no confidence against Tshwane executives mayor Steve Mokgalapa, speaker Katlego Mathebe, acting speaker Zweli Khumalo, and chair of chairs Gert Pretorius.

In a statement, the party said it was against protocol to make the demand and both the EFF and ANC knew this.

“The City of Tshwane’s rules and orders bylaws provide in section 8 (3) that the order of business at a special meeting of council is determined by the speaker.

“The ANC’s motive was clear from the start of the meeting as their behaviour was disruptive, including calling for extensive caucus breaks and numerous frivolous objections to collapse the meeting.

“The fact is that both the ANC and the EFF are not sure of each other’s support in their joint attempt to unseat the DA in Tshwane.”

Both the EFF and ANC have now pinned their hopes on Gauteng cooperative governance and traditional affairs MEC Lebogang Maile to deal with Mathebe.

The EFF’s regional chair and caucus leader Moafrika Mabogoane said their reason for the walkout was Mathebe’s actions.

“When the speaker calls the meeting, she must call the petitioners to decide on the order of the agenda,” said Mabogoane.

She did not do this according to both the ANC and EFF.

“That’s why we thought to sit and wait was a waste of time,” he added.

Mabogoane also claims the EFF was reliably informed that their motions would be denied in council on Thursday.

Maepa accuses the DA of not adhering to democracy as the speaker wanted to establish the agenda of a meeting she did not arrange.

“We put together a petition to remove the speaker. We are not as aggressive as the DA, who wants to hold on to power.”