'The fact that Makhubo is holding press conferences rather than serving a 15-year sentence for corruption is an indictment of our criminal justice system,' Mashaba said. 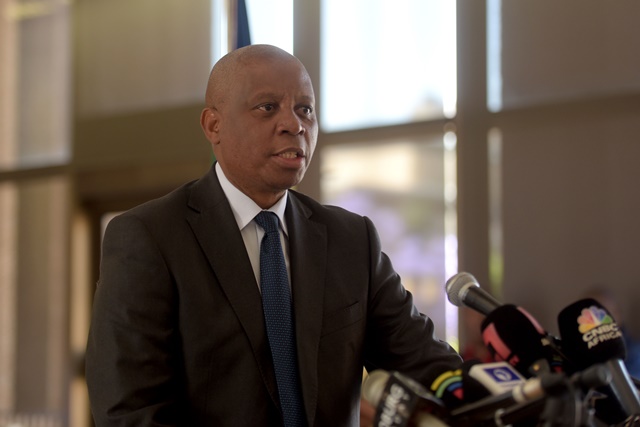 Former City of Johannesburg mayor Herman Mashaba has accused his successor, Geoff Makhubo, of reversing the gains the City had made under his tenure.

Mashaba was responding to earlier reports by Makhubo on Wednesday that the City was on the brink of financial collapse.

EWN earlier reported Makhubo had told the media “populist” policies and decision-making by the Mashaba administration had made the municipality dysfunctional.

Meanwhile, ENCA also reported Makhubo had accused Mashaba of not only ruining the finances of the City but also of abusing the Johannesburg Metro Police Department (JMPD) through his office for political gains.

Makhubo said newly paraded JMPD officers had to be retrained because they had allegedly graduated before completing their training.

Mashaba retaliated in a statement, saying Makhubo’s antics were part of a long pattern of crying wolf against the former coalition government.

“From day one of the coalition government in 2016, Makhubo predicted the imminent financial collapse of the City, sighting an impending inability to make the next salary run. This never transpired.

“Contrary to these allegations, the pre-audit financial statements for the 2018/19 financial year reflected a significant improvement in the City’s financial health and liquidity, with its closing cash balance increasing from R2.2bn at the end of 2017/18, to R5.3bn by the close of 2018/19,” said Mashaba.

He described Makhubo’s comments on the JMPD officers as disingenuous.

“Makhubo’s claims about the JMPD recruits are equally disingenuous and are clearly a continuation of his effort to purge the chief of police, David Tembe, and recapture the law enforcement agencies that were waging wars against crime and corruption under the leadership of the coalition government.

“The fact that Makhubo is holding press conferences rather than serving a 15-year sentence for corruption is an indictment of our criminal justice system. It is well documented that Makhubo was earning millions in profits through a contractual relationship with a Gupta-linked company while serving as the MMC of finance,” Mashaba said.

AmaBhungane previously reported on how Makhubo’s firm, Molelwane Consulting, was given a 10% cut of a controversial contract Regiments received to manage the City’s sinking fund, a large kitty used to provide for future liabilities.

One of Molelwane’s – and thus Makhubo’s – deliverables is to “maintain … strategic relationships” with the City.

At the time the contract was signed, Makhubo held no official position in the ANC or City. But when he was elected – first as ANC regional treasurer and then the City’s MMC for finance – a serious conflict of interest arose.

By 2011, Makhubo’s company was receiving a 10% cut of a contract that he, as MMC for finance, was tasked with overseeing. AmaBhungane estimated that between 2006 and 2015, Molelwane Consulting had received R30m.

Makhubo previously said he was cleared of any wrongdoing by the ANC’s integrity commission.

On Wednesday, Mashaba said he believed it would be intolerable to have to entertain any lessons of morality, ethics or leadership from Makhubo.