Lamola lays into ‘megalomaniac’ Malema for ‘I’m in charge’ comments

While EFF MPs were on their best behaviour on Wednesday, the justice minister, in the final speech of the debate, laid into them. 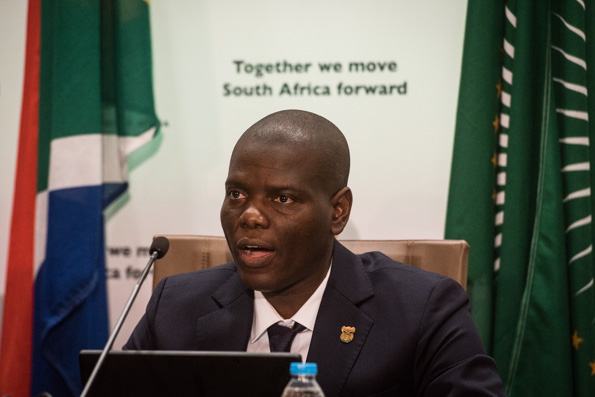 The second of day of the state of the nation address (Sona) debate ended with Justice and Correctional Services Minister Ronald Lamola lighting up the ANC benches after lambasting EFF leader Julius Malema for claiming he is “in charge” in a democracy.

President Cyril Ramaphosa is expected to respond to the debate on his Sona on Thursday, following two days of pressure from opposition parties in the National Assembly.

But it was Lamola’s final speech of the day that brought the National Assembly to life just before 8pm on Wednesday.

While EFF MPs were on their best behaviour on Wednesday, Justice Minister Ronald Lamola, in the final speech of the debate, laid into them.

Referring to Malema’s performance the previous day, in which he declared “I’m in charge”, Lamola said: “Honourable Malema stood here and held a spectacular monologue in full view of South Africans. In his monologue, he seems to think he is in charge and that the world revolves around him. This is just a figment of his imagination in the fantasy of his militarised world. You cannot be in charge in a democracy. The people are in charge.”

“It is clear that in the corridors of the EFF, it is Malema’s way or the highway.

“The minority cannot govern the majority through anarchy. Our constitutional democracy allows the minority to contribute through persuasion and superior logic. The tendency of holding the majority at ransom through disorderly efforts is the greatest exhibition of autocratic tendencies which thrive in the party.

“Those who make the loudest noise must never be allowed to drown the voice of reason.”

Throughout most of Lamola’s speech, Malema glared at him.

At the end of the speech, the ANC broke out in song in honour of the late Ladysmith Black Mambazo founder, Joseph Shabalala.

The continuation of the Sona debate on Wednesday was free from major disruptions from the EFF.

The red party delayed the Sona last Thursday. The start of the Sona debate on Tuesday was also overshadowed by allegations of domestic abuse from ANC MP Jacob Boy Mamabolo and Malema.

Instead, Wednesday’s proceedings became a standard parliamentary debate, largely between the DA and ANC.

Following suit from their interim leader John Steenhuisen, DA MPs would attack the ANC on service delivery, contrast it with service delivery in the Western Cape, warn of catastrophe if the ANC implemented policies such as National Health Insurance and expropriation without compensation, and advance the narrative that Ramaphosa was hamstrung by elements in his own party without the conviction to stand up to them, choosing the ANC above the people of the country.

The ANC’s speakers, mostly ministers and deputy ministers, would respond with technocratic speeches, outlining some historic gains since the birth of democracy, welcoming Ramaphosa’s announcements in their portfolios and giving more detail on these, with the assurance that there was a plan, but that reforms would not happen overnight.

The DA challenged Ramaphosa to show a spine in his response.

DA MP Angel Khanyile said: “While the family members continue to search for their loved ones, we will leave no stone unturned searching for your backbone, Mr President, to take bold decisions on important matters affecting our country.

DA MP Solly Malatsi added: “Mr President, now more than ever is the time for policy uniformity in government and not the expedient policy double-speak that currently prevails in your government.

“What the country needs is the repetitive singular chorus of policy certainty from your administration – not another remix of a classic song as a rallying call.”

EFF chief whip Floyd Shivambu said “there was no substance to entertain” in the debate. Instead, he said the ANC was just a “mediator between black people and the white capitalist establishment”, extolled the virtues of coal as an energy source, railed against independent power producers and called on moving parliament out of Cape Town.

Ramaphosa sat through most of Wednesday’s debate, as he did on Tuesday, virtually expressionless.

When the EFF left the chamber last week Thursday, after more than an hour of disruptions, Malema warned that the party would engage with Ramaphosa in that manner as long as Public Enterprises Minister Pravin Gordhan remained in his position.

On Wednesday, Gordhan sat comfortably in the ANC’s front benches.

Ramaphosa’s response to the debate is expected to start at 2pm.