Mngxitama's party is pursuing an agenda to radically improve the lives of black South Africans, though some questions will be raised about its practicality. 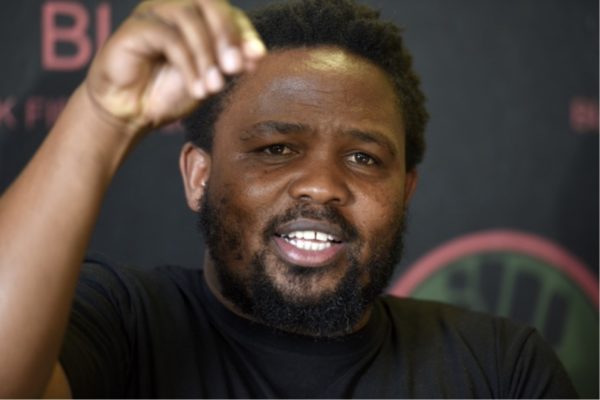 The radical pro-black political party Black First Land First (BLF) will be contesting its first local government elections in October after failing to win a seat in the national and provincial elections in 2019.

The party has often divided opinion, with its most stringent opponents in the form of AfriForum and the Freedom Front Plus often taking it to court or the electoral commission, and almost succeeding in having it deregistered as a political party on the basis that it excludes white people as members.

Its president, Andile Mngxitama, has continued undeterred, however, and has begun publicising his proposals for how to fix local government, which have been summed up in a list of 15 points (see below).

Among the BLF’s suggestions are that all graduates should be given jobs, though like most such demands the party is not specific on how this will be achieved.

According to Nombulelo Precious Mncayi of North-West University, of the graduates who are currently employed throughout South Africa, more than 70% are employed in a job relevant to their field of study, though 27% are in jobs that don’t relate directly to their studies.

She was critical last month of students who continue to enrol for qualifications with low employment prospects in South Africa. She pointed out that the majority of these affected students are black.

“According to the 2019 Post-School Education and Training Monitoring report, between 2010 and 2016, the field of humanities accounted for the biggest share of graduations (6.6%). This was followed by science, engineering and technology, business management and education – with graduation rates of 5.5%, 5.2% and 1.8% respectively.

“My research in South Africa suggests that a graduate’s pathway depends on their field of study. Studying the relationship between career choice and unemployment length revealed the most important factors affecting graduate unemployment were qualifications and majors. These didn’t appear to be aligned with labour market requirements. To achieve a better alignment, it’s also important to know why students are choosing to study subjects that aren’t in high demand.”

She pointed out that human resources, industrial psychology, labour relations management, public management, public administration and politics were the most popular majors at university but that “many graduates in these mainstream subjects had to wait for a long time before finding a job”.

By contrast, those who studied accounting, maths, education and health had the shortest average waiting periods after graduating.

Precious Mncayi found that, of those graduates who were unemployed, 80.8% were black and only 19.2% white. More than two-thirds of the respondents with humanities degrees were black.

She recommended “a focus on the supply side of the youth labour market – starting with the basic education curriculum to ensure that graduates are adequately skilled to meet the needs of the labour market. Otherwise mismatches will continue to rise and be masked by increased access to higher education and low graduate unemployment rates.”

The BLF also wants to halve unemployment in the country within five years, which would mean needing to create about 4 million jobs.

Along with promoting “black love”, it will also stop gender-based violence, end corruption, launch a municipal bank, insist that every house grow its own vegetables, give away land (in particular to churches) and provide free “safe Wi-Fi”, among other undertakings.

The party’s president has often expressed his suspicions of 5G networks, so if the BLF were to come to power, only less advanced communication technologies would be trusted.

Take a look at all the party’s 15 proposals for local government for yourself: 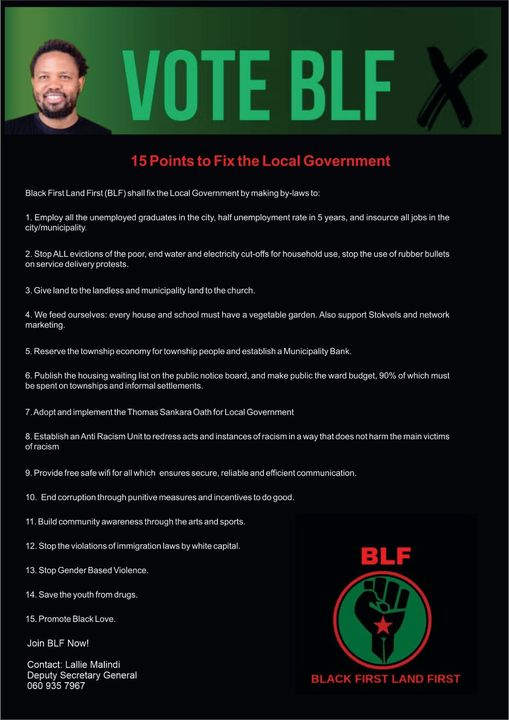 The BLF’s 15 proposals to entice voters in this year’s elections.