Mbalula: Response to ‘coup’ ‘probably took longer than we were supposed to’

The minister of transport faced down a barrage of questions about the 'parlous state' of SA and the ANC's role in last week's violence. 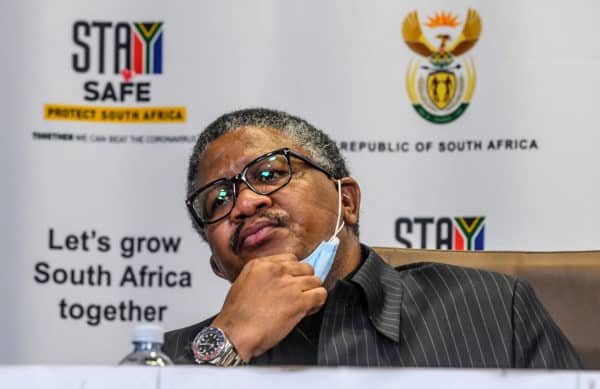 In an interview on Wednesday with the BBC’s HardTalk, Transport Minister and ANC NEC member Fikile Mbalula faced an increasing barrage of critical questions from show host Stephen Sackur in an exchange the minister later said was “hard talk indeed”.

He characterised last week’s riots as a “hyped-up accumulation of anarchy at the highest levels … anarchy is the highest state of disorder”.

“It exhibited opportunistic elements like criminality as a result of the unemployed jumping on to the bandwagon of looting,” he argued.

He said the poor had mostly been dragged in through this “hype” but that the calls and mobilisation for the riots on social networks had all the characteristics of an attempt at “undermining the democratic state and mobilising for its overthrowal [sic]”.

He agreed that insurrection was an “ultimate aim of coup plotters that they will hope for, but the ground for them was not fertile because for you to achieve an insurrection you’ve got to have a weakened state, in the form of the police, to maintain law and order, and the soldiers”.

He admitted that “probably on our part, the response to this was delayed with a couple of days … and then it gave them a field day”.

Mbalula said that despite this, “they” could not achieve their aims of sabotaging the key economic elements of the economy, demobilisation of the army and the intimidation of judges, particularly Deputy Chief Justice Raymond Zondo.

Sackur asked for evidence of Mbalula’s allegations and to name the people he was describing as “them”.

Mbalula said “they are faceless, Steve” but added that suspended ANC member Carl Niehaus was “at the forefront, and some other people around him who are basically calling for the undermining of the rule of law”.

Sackur pointed out that no charges had yet been laid against any of these individuals and, “therefore, in legal terms, you and indeed we at the BBC have to be extraordinarily careful here”.

“No charges have been laid against that individual. Thousands of people have been arrested but nobody has been accused, as far as I’m aware, of leading some sort of coup, insurrection, attempt to bring down the democratic government, and some might say that you and Mr Ramaphosa are simply trying to divert attention from the parlous state of the economy, the desperation that your people feel, which was exhibited on the streets when so many people simply took the opportunity to loot shops and try and win some new possessions.”

Mbalula responded that he had already admitted to what had led to the anarchy and that it had indeed exhibited opportunistic elements of criminality, which had been exploited by the “coup plotters”.

Sackur then pointed to Defence Minister Nosiviwe Mapisa-Nqakula having said that it could not have been a coup or there would have been a face behind the riots.

“There is a face,” said Mbalula. “The elements of it will deny that they were physically there to petrol-bomb, but there were people who were there, who were there openly on social media encouraging and supporting the vandalism. They were not brave enough to be in the forefront, burning. They were calling for anarchy from the [air-] conditioned offices or wherever they were.”

When Sackur asked him whether the recipients of state capture had been involved, as alleged by the Thabo Mbeki Foundation, Mbalula said it was a matter of wording, but “it is basically the same”.

He wanted to know if Mbalula felt he could now not trust his own security apparatus if they had been infiltrated by individuals promoting state capture, but Mbalula denied that and said he had full confidence in the state and its capacity, although “probably we took longer than we were supposed to”.

He argued that the majority of South Africans had not wanted to participate, or the state would indeed have been overthrown.

When asked what he believed Zuma’s connection was to the riots, Mbalula started by pointing out that the violence had been limited to KwaZulu-Natal and parts of Gauteng, but he still acknowledged that the scale of “the anarchy” had been something new in democratic South Africa.

“Zuma’s name was being used by these criminal elements and anarchists as the main thing for why they are burning down the malls and all of that. We asked an ideological question: you can’t say you’re standing for the poorest of the poor, the majority of whom are Africans, and then you go and loot amongst them and impoverish them further and get them to the doldrums of unemployment further, which is what this looting has done.”

He dismissed all claims of there being a “socialist revolution” in progress.

“There is no revolution. It is anarchy.”

The interview then became heated, with Mbalula accusing Sackur of interrupting him and being impatient with him. Sackur continued to apply pressure and challenged Mbalula to back up his earlier claims with evidence that the people behind the riots had been “terrorists”. In particular, he wanted to know why they had not been arrested and named.

“There is evidence that is being examined by the authorities,” countered Mbalula, but Sackur alleged that the “kindling” of the violence had been “27 years of failure” by the ANC government to address the structural problems in South Africa.

“You’ve got 32% official unemployment, but really it’s much higher, and for young people it’s almost 70% unemployment. You have the most unequal society in the world, according to many measurements, and you in the ANC over more than a quarter of a century have failed to fix those problems.”

“You are very much incorrect,” said Mbalula. “You are right about the high rate of unemployment. To say that it all started and ends with the ANC, it is all ANC failure … you are wrong completely. You simply are erasing apartheid in 27 years. And when we inherited a bankrupt state, you know very well we had to deal with that.”

He said the South African economy’s underperformance had been affected by “objective realities” affecting “the whole world”, which had “further exacerbated our situation”.

When Sackur asked Mbalula whether the message he was giving South Africans was therefore whether more than a quarter of a century wasn’t enough time to make any real difference to the fate of people in the country, Mbalula exclaimed: “[What about] 300 years of colonisation!”

At that point Mbalula raised his voice and the two men spoke over each other, with the minister finally repeating that had “the masses” been dissatisfied with the government, they would have overthrown it, leaving him to return to his theory that the riots had been caused by “opportunistic elements”.

He dismissed the views of analysts who criticised the government as denying the challenges in the country, which he argued was not the case.

“Our recovery plan is taking off and yet all our efforts are being undermined by these sideshows that include this anarchy we are talking about.”

Sackur told him that “from the outside, South Africa looks dysfunctional” and he referenced the taxi wars in Cape Town where more than 80 people had been murdered in a fight over turf. In Durban, there had been ethnic conflict between black South Africans and Indians.

Mbalula said he was working to get the taxi wars under control and again referenced apartheid and all the challenges the ANC government had inherited from a bankrupt state.

The interview ended with Sackur asking Mbalula how much longer the ANC was planning to keep blaming apartheid, but Mbalula said they were not blaming it, it was their inheritance and “we seek to undo it every day”, but “that is what it is”.