EFF to ‘share power’ with ANC, and Malema ‘will be president’ – reports

The EFF's two top leaders are in a bullish mood about their party's prospects ahead of the EFF's eighth birthday. 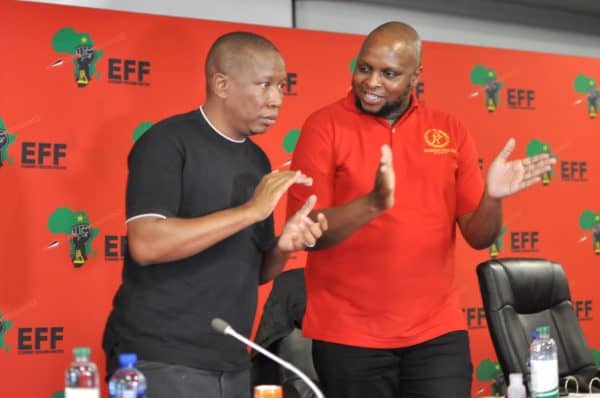 Senior leaders of the Economic Freedom Fighters (EFF) have been giving numerous media interviews ahead of the party’s eighth birthday tomorrow, with EFF deputy president Floyd Shivambu explaining how he sees the evolution of coalition politics after the upcoming local government elections.

The elections will most likely be postponed after a recommendation to delay the polls until February next year was delivered by the Moseneke investigation commissioned by the Independent Electoral Commission (IEC).

The IEC this week approached the courts to allow it to implement that recommendation.

Shivambu told Sunday World that the EFF would be prepared to work with the ANC in a power-sharing agreement where they would “share the control of municipalities instead of working together in councils”, since it was the EFF’s view that council coalitions had failed after the 2016 elections saw the ANC edged out of power in several key metros.

The EFF initially gave its support to the DA in order to unseat the ANC in several major metros, but has vowed never to support the DA again, allegedly because the DA subsequently “decided to be an exclusively white party”.

Following the withdrawal of support from the EFF, the ANC subsequently retook control of the Johannesburg metro, with unstable leadership also the order of the day in Tshwane and Nelson Mandela Bay.

Shivambu was confident about the growth of the EFF, predicting that they would achieve a massive 30% share of the vote (representing a nearly 300% increase since 2019, when they received 10.8% in national elections). He predicted that they would, in the process, replace the DA as the second largest party in South Africa.

‘Like it or not, I’ll be president one day’

Meanwhile, EFF leader Julius Malema said in other interviews that he told former president Jacob Zuma at Nkandla during a much-publicised visit to the former ANC leader’s home that he was destined to be South Africa’s president, whether Zuma liked that or not.

He claimed to the Sunday Times to have asked Zuma to attend the Zondo commission into state capture in order to avoid some of the ugly scenes that played out last week in KwaZulu-Natal and Gauteng.

He had reportedly told Zuma that he did not want to “inherit a dysfunctional government which has got no institutions of the state that are respectable”.

Malema further claimed that the ANC under President Cyril Ramaphosa had mismanaged the ANC and the country at a basic organisational level following Zuma’s imprisonment for contempt.

Malema argued that the ANC had been better in the past at communicating its posture and decisions and had failed to share a coherent party line on supporting the court decision. ANC branches should also have warned the government of what was coming, but the lines of communication were not functioning properly.

This had, in part, led to the violence, while the government had also failed at managing the fallout and violence.

He slammed Ramaphosa and the state for effectively being “illegitimate” by having had to deploy the SA National Defence Force.

He argued that if there had indeed been an organised coup attempt by insurrectionists, the South African state would actually have been powerless to prevent it.

“This government would be gone. So they must stop creating some impression that they’ve defeated an attempted coup and insurrection,” he told City Press.