‘There is no longer lockdown for EFF’: Malema says they won’t follow ‘nonsense’

Malema says his party is going back to the streets to fight socio-economic issues. 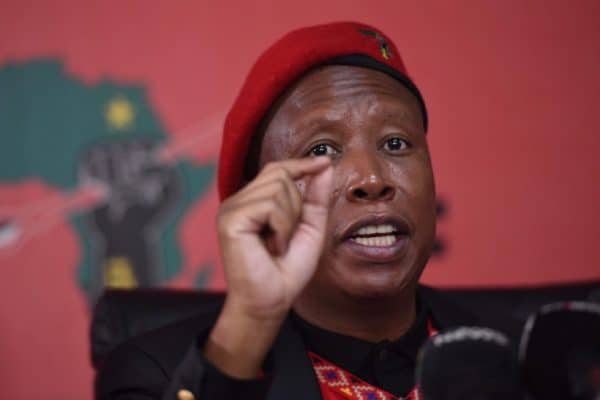 The Economic Freedom Fighters (EFF) will get its campaign for the local government elections, scheduled for October 27, underway without adherence to level 3 lockdown regulations, as per the Disaster Management Act.

This was announced on Wednesday by party leader Julius Malema during the party’s presser in Braamfontein.

“We are going to work. We are not working with lockdowns. We are back to work. This weekend, all our outstanding regions are going to hold their RPAs [regional people’s assemblies]. No policeman, no minister, no one can tell us not to hold our RPAs,” said Malema.

“What lockdown? We are done. We have registered candidates. We are campaigning now … There is no longer lockdown for EFF.”

“If we follow those lockdown regulations… That is absolute nonsense we are not going to follow. There is no lockdown that is going to tell us to do anything.”

Malema said the party was going back to the streets to fight socio-economic issues.

He questioned the delays in the distribution of the Sputinik V and Sinovac Covid-19 vaccines.

He said the party was already planning a march to camp outside the house of the South African Health Products Regulatory Authority (Sahpra) chairperson Helen Rees.

The EFF has publicly accused Rees of bias against Chinese and Russian vaccines in favour of Western vaccines.

This prompted the party to stage a march to the headquarters of Sahpra demanding that the body approve the said vaccines.

The party said the vaccines were being delayed purposefully because Rees’s husband, Dr Fazel Randera, was a shareholder at Liseko Investments, a partner at Aspen which manufactures the Johnson & Johnson vaccine.

“The next campaign is that one of sleeping outside the house of Helen Reece. We are going there,” said Malema.

The EFF is facing criminal charges for their march to the Sahpra offices in back in June.

On Youth Day, Malema threatened Sahpra CEO Boitumelo Semete-Makokotlela, saying the party would stage a sleep-in at her residence.

South African Police Service (Saps) spokesperson Colonel Brenda Muridili said at the time: “A case has been registered at Saps Sunnyside for the contravention of Disaster Management regulations.”

She said when investigations are concluded, “the case will be taken to court”.