By Natasha Mazzone's observation the EFF’s manifesto launch is an illegal gathering tantamount to illegal campaigning. 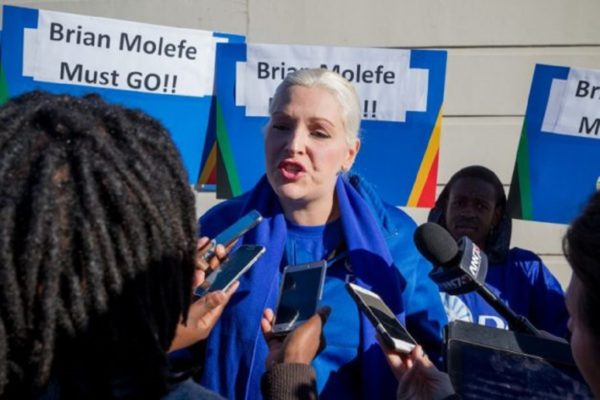 According to Mazzone, the event “appears to be blatant illegal campaigning by the EFF.”

“It is clear from the EFF’s campaign event today that the party has no regard for the rule of law and has once again proven that they are not above using their own supporters as fodder during this pandemic,” said Mazzone in a statement.

She went on to cite the current adjusted level 2 lockdown regulations which caps the legal limit for outdoor gatherings at 500 people.

“It is evident from the pictures and videos coming from the EFF’s event today that attendance is in excess of 500 people. The EFF’s manifesto launch is, therefore, an illegal gathering and their display today is tantamount to illegal campaigning,” said Mazzone.

Natasha Mazzone and the DA believe that the IEC “must do what is right and hold the EFF accountable for their actions.”

According to the party, the EFF’s manifesto launch is an illegal event taking place during the campaign period and therefore undermines the freeness and fairness of the elections.

The DA is of the belief that the EFF’s actions have set them up for possible deregistration as a political party.

“All South Africans have been forced to live by the ANC’s senseless lockdown rules. However, there cannot be one set of rules for ordinary citizens and another for the EFF.”

“Minister Cele happily opened water cannons on pensioners and vulnerable South Africans waiting in a SASSA queue, but has failed to bring that same energy when dealing with his mate, Julius Malema. Where are the water cannons today?”

Natasha Mazzone then asked of the police minister is “too deep in Malema’s pocket to take action against the EFF’s flagrant disregard of the law.”

She concluded her statement by comparing the DA’s manifesto launch to that of the EFF and touted the DA is the better party for sticking to the law and complying with Covid regulations.

Malema promises electricity and houses, implies the ANC doesn't care for its people
3 hours ago
3 hours ago

Malema promises electricity and houses, implies the ANC doesn't care for its people
3 hours ago
3 hours ago