The EFF leader also took a swipe at the DA, saying they're tired of pretending not to be racist, and their Phoenix poster debacle proves it. 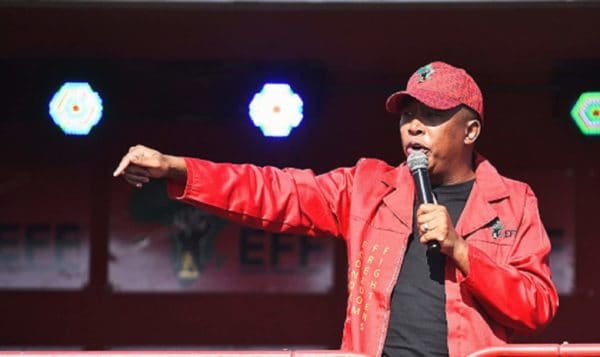 EFF Leader Julius Malema says those who support President Cyril Ramaphosa are given a “licence to be corrupt”, which is why there has yet to be action against Eastern Cape Premier Oscar Mabuyane for allegedly pocketing money meant for the late Winnie Madikizela-Mandela’s memorial service.

Malema, who was on the campaign trail in Bloemhof, North West, on Sunday, called on Mabuyane to step down, after the Public Protector’s report implicating Mabuyane was released on Friday.

Mabuyane, along with Eastern Cape Public Works MEC Babalo Madikizela and the provincial ANC all apparently shared in R1.1 million set aside for transport to Madikizela-Mandela’s memorial service in 2018.

Mabuyane’s R450 000 share of the spoils was apparently used to fund home renovations, while a private company owned by Madikizela’s wife received R350 000 through the Mbizana Local Municipality. The ANC in the province received the rest, through its fundraising account.

Earlier on Sunday, Ramaphosa said he had not yet read the two day-old report and that he had only heard about it via the media.

Malema pulled no punches on Saturday, accusing Ramaphosa of emboldening those close to him, as Mabuyane is a known ally of the president’s.

“When you support Ramaphosa you got the license to be corrupt and Oscar Mabuyane is such an example. They are going to take that Public Protector report on review because that’s what the court has allowed. They are delaying unnecessarily, there is nothing that will change,” Malema said.

“We don’t not need the Public Protector, Cyril got that information. Cyril got the bank statement, he did nothing about it. Oscar must step down, whether he’s going to review this case or not, he must step down. If not the ANC must fire him.”

Malema also took a swipe at the DA, saying the party’s current poster drama is nothing to be surprised about, as they “are being themselves”, and the posters in Phoenix were simply the DA’s way of showing that they are “tired of being pretentious”.