'You think you're voting for a red party or an orange party... you are gonna [sic] end up with a green party,' says John Steenhuisen. 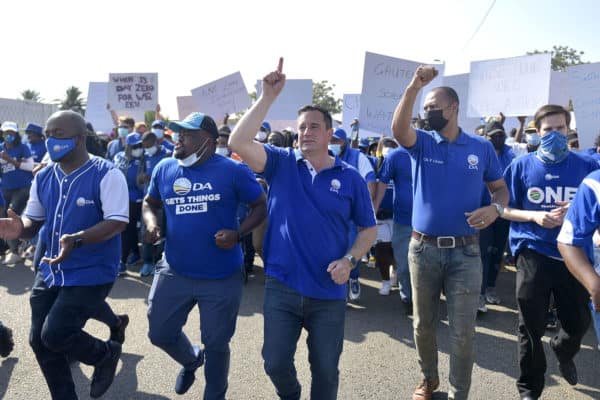 DA leader John Steenhuisen joined the DA as they protested against what they call utter neglect by the ANC in managing water resources yesterday at Gallagher estate, 6 October 2021.The march was to Gallagher estate where a meeting was being held in regard to water. Picture: Neil McCartney

After appealing to South Africans not to get sidetracked by smaller parties come the 1 November local government elections, Democratic Alliance (DA) leader John Steenhuisen has sought to clarify the remarks.

Steenhuisen said he was not concerned by the smaller parties, but was rather “making people aware that they have got a strategic choice to make in their selection”.

“That is the only two options you have. Voting for smaller parties splits the opposition vote and will allow the ANC back into the city hall in places like the Nelson Mandela Bay – that is a strategic vote that people have to make.

“You think you’re voting for a red party or an orange party… you are gonna [sic] end up with a green party.”

ALSO READ: Steenhuisen vows he’d rather be in opposition than rule with EFF

This after businessman Gayton McKenzie’s Patriotic Alliance (PA), which frustrated the DA’s political monopoly in some coloured communities in Gauteng during recent by-elections, announced that it aimed to continue its onslaught against the DA in Cape Town.

In the May by-election, the PA gave the DA a run for its money when it wrested wards 17 and 18 in Eldorado Park, Johannesburg.

The party deployed its Gqeberha-based national chair, Marlon Daniels, to lead its campaign in the DA-dominated Cape Town. It is targeting the coloured and black townships in the Cape Flats and other areas it believes are ignored by the DA.

Daniels’ campaign mandate is for the PA to reduce the DA majority in the Cape Town metro to less than 50%, to force a coalition government.

“We are getting very good support from the people,” said Daniels.

“They tell us they are sick and tired of being undermined, they want an alternative. They have been promised too much for too long but nothing was been delivered.”

Steenhuisen, who was campaigning in the Nelson Mandela Metro on Wednesday, said his party was optimistic about getting a mandate in the metro and was not thinking about coalitions yet.

“We are going out like any other political party to get the majority… the [Nelson Mandela] Bay has had five years of instability, government coming in, being removed by the coalition corruption, coming and trying to pick up the pieces again, I think, what the Bay needs more than anything else is stability.”