The ANC suffered major losses on Monday as councillors meet this week for their inaugural council meetings to elect new speakers, mayors and chief whips. 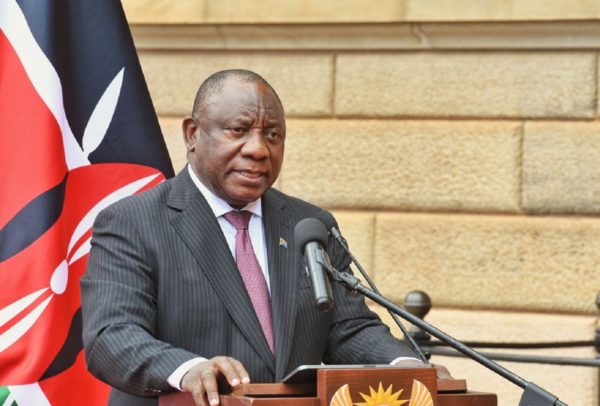 President Cyril Ramaphosa addressing the media at the Union Buildings in Tshwane on Tuesday during the two-day state of visit of Kenyan President Uhuru Kenyatta. Picture: Twitter/@PresidencyZA

The booting out of the ANC from power in the country’s hung municipalities has been disappointing and a big setback for the governing party.

That is according to President Cyril Ramaphosa, who says the ANC has learned major lessons after its electoral support dipped below 50% nationally in the local government elections, the first time since the dawn of democracy.

“As the president of the governing party, it is disappointing for the ANC but we should accept the clear message of our people on the ANC. We’ve taken heed and listened, and this for us is a big setback, but it is also a big lesson,” Ramaphosa said.

“We are a party that learns very quickly and we are going to go back to the drawing board. We’re going to reflect on all these setbacks.”

The president made the remarks on Tuesday during a joint press conference at the Union Buildings in Tshwane with his Kenyan counterpart, President Uhuru Kenyatta, who is on a two-day state visit to South Africa.

The ANC suffered major losses on Monday as newly elected councillors meet this week for their inaugural council meetings to elect new speakers, mayors and chief whips in hung councils after the 1 November municipal elections.

The party lost control of Gauteng’s key metros of Johannesburg and Ekurhuleni to the Democratic Alliance (DA), after opposition parties banded together to remove the ANC from power.

The ANC’s chances of taking control of Tshwane and eThekwini metros also remain in doubt as their councils meet.

Despite losing the metros to the opposition, Ramaphosa said events unfolding in the country was a sign that South Africa’s democracy was maturing.

“What is unfolding is how democracy works. This is the footsteps, if you like, of democracy and we’ve seen it play out throughout the country,” he said.

While acknowledging that coalitions can be fragile and sometimes messy, Ramaphosa called on all parties that have emerged victorious in the polls to focus on service delivery and ensure that their coalition arrangements don’t collapse.

“All we what to see, speaking now as the president of the republic, I’d like to see stability in our local government sector that whatever coalitions have been formed and are being formed will result in stable local government.

The president said he was thrilled that most of the executive mayors who had been elected in metros were women.

“I was particularly pleased that a number of female metro mayors have come to the fore on the platform, and that is good in as far as our agenda to promote the empowerment of women,” he said.

Ramaphosa also took the opportunity to wish all elected councillors well on their five-year term in municipalities.

“We wish those councillors who have been elected the very best and may they all continue to work well for the people in various communities across the country.”