The EFF leader wants a public statement of apology from Kunene, a former EFF member. Responding to Malema’s “pantiti” comments last week, Kunene, in a interview on eNCA, threatened to expose the EFF leader for who he is, calling him a “cockroach” and “criminal”, among other names.

He said: “I think it’s pure bitterness and jealousy. Julius has gone on to call us these names for a very long time. We have really tried to be mature and not respond to him. I’m going to deal with this little frog. Julius is just an irritating cockroach that I must now deal with publicly. I will call the press and begin to show you that Julius, whatever he criticises, he is,” he said.

“Julius is a criminal and I’m going to show South Africans the crimes he has been involved in. I’m going to tell South Africans why I left the EFF because of this cockroach. So I’m going to deal with this cockroach because we have given him time and respect. He’s got his issues, he hates himself and now he hates everybody else. He also went for the TG of the ANC, he gets personal in politics. We have stood back, but now it’s over. When I meet him, he must tell me that I’m a pantiti in my face.”

According to TimesLIVE, the EFF leader, through his lawyers, has demanded that Kunene withdraw his comments or face a R1 million lawsuit. He reportedly accused Kunene of hate speech and tribalism, saying the comments he made caused “significant reputational damage”.

The EFF leader wants a public statement of apology from Kunene, a former EFF member.

This is not Malema’s first time taking a former EFF member to the cleaners over public comments.

Earlier this year, he demanded a retraction from Thembinkosi Rawula and accused him of tarnishing his political image. 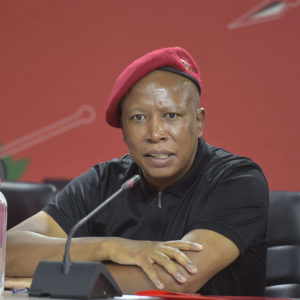