Government sold us the country off for braai packs – Maimane

'It's shocking that corruption is so entrenched in some that it's deep in their underwear,' says the DA leader. The ANC government sold the country off for braai packs, Democratic Alliance leader Mmusi Maine said addressing hundreds of DA supporters at the Union Building today. The DA marched to the building in protest against the Eskom power crisis.

“We have a government that has forgotten about the people, it’s a government that looks after themselves, they sell us off for braai packs. Can you imagine being corrupt to a point that even when you’re a billionaire president, you’re still willing to accept R500,000 from Bosasa? It’s shocking that corruption is so entrenched in some that it’s deep in their underwear.”

He said President Cyril Ramaposa, his son Andile, Jacob Zuma, and even Duduzane Zuma could be in the same WhatsApp group as there was clearly “no new dawn, only new Vaseline” since Ramaphosa was repeating the same mistakes Zuma had made.

“We can’t trust criminals to solve our problems.

“Our people have lost their jobs. Young people have become pensioners at 18 years. I’m here to say, the ANC is irredeemable, and we need to stand up for change that builds one South Africa for all.

“Under a DA government, you are going to participate in a one-year voluntary national civilian service, and we will pay you for the whole year.”

The DA’s premier candidate Solly Msimanga alongside Natasha Mazzone also weighed in to table how the ANC government had turned the country into a “nationwide joke”.

With 40 days to go until the elections, the party is steadfast in bringing an end to the power crisis, as well as the ANC rule. 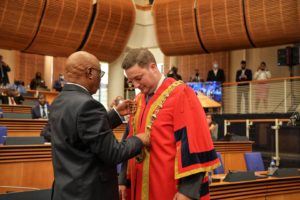 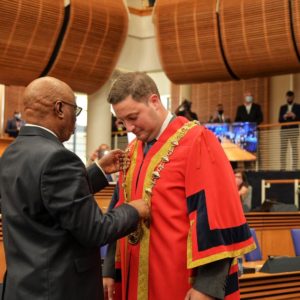