He added that women have sole right to their bodies and they could dress and act as they deemed fit, without fear of being victimised. 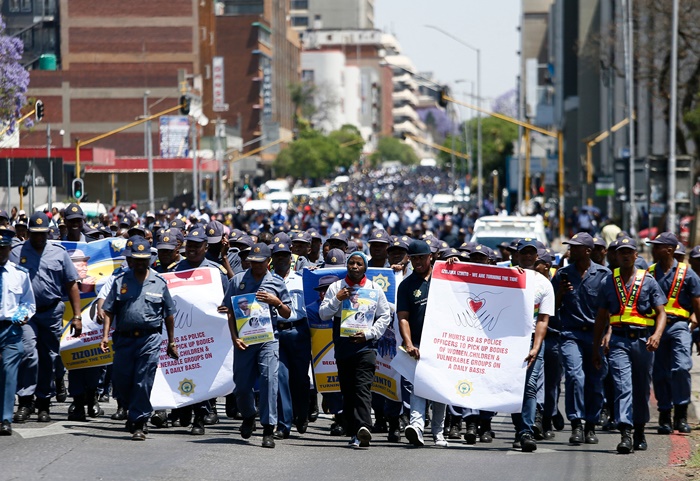 Police Minister Bheki Cele has called on the police to stop turning abused women away when they report cases at police stations.

On Monday, Cele led a march through Tshwane of more than 1,500 police officers to raise awareness about gender-based violence.

Speaking to the men in blue, he said it was not the job of police officers to turn abused women away from police stations.

“Never tell a woman who reports abuse to go back and negotiate. It’s not your job to tell women to negotiate with their husbands or boyfriends.”

Cele said police officers needed to respond, and respond quickly, to complaints of abuse and rape to ensure that the victims were safe.

He added that if a victim kept getting turned away from police stations, they would eventually stop coming, because their abusive partners would have permanently silenced them.

The minister also ordered police officers to stop telling women, who are victims of rape, that they were dressed inappropriately, or if they dressed differently, they would not be targeted.

“You are not a fashion designer, woman have a right to dress how they want and we have to protect them.”

He said women have sole right to their bodies and they could dress and act as they deemed fit, without fear of being victimised.

Cele called on police officers to stop secondary victimisation at police stations and that all reports should be taken seriously and acted upon.

Cele advised them as well as cadets, who will graduate in December, to respect all women, adding every officer was a member of a family and that those families have mothers, sisters and wives.

“These are the first people you need to respect. We need to make a serious commitment that we will forever respect our mothers, our sisters and our girlfriends.

“You boys treat girls better so the world can learn from you.”