The community believes foreign nationals in the area committed the crime. 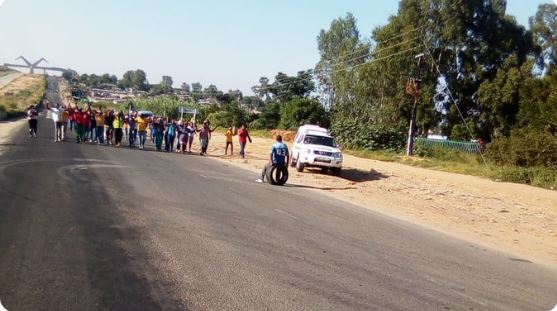 Residents have reportedly begun barricading the main road leading into the informal settlement, with rocks and bottles being thrown at passing motorists. Image: Twitter/@MichaelSun168

Social media calls for a shutdown in Diepsloot, following the murder of a police officer, border on incitement to commit violence and can be construed as a criminal offence, according to Gauteng police commissioner Lieutenant-General Elias Mawela.

On Thursday morning, members of the community took to the streets, using burning tyres and rocks to block roads in the wake of the murder of Detective Captain Oupa Matjie last Friday.

The community believes foreign nationals in the area committed the crime.

But Mawela called for calm, saying the law should be allowed to take its course.

He urged the community to be mindful of the law and due processes.

“The arrest of the suspect who allegedly shot and killed Captain Matjie came through after collaboration between the community and the police. It is therefore important that the suspect’s appearance before court be secured and that it should not be jeopardised in any manner so that the suspect faces the full might of the law,” Mawela said.

News24 previously reported that police said Matjie and a detective sergeant were tracing suspects wanted in an attempted murder and house robbery case.

Public order police were on high alert and dispersed groups of people who barricaded the main roads in the area, including William Nicol Drive and the R511, said police spokesperson Brigadier Mathapelo Peters.

Peters said a group of people went to the police station at around 8am on Thursday morning, demanding to see the person who was arrested for Matjie’s murder.

The person is expected to appear in the Randburg Magistrate’s Court on Thursday.

Public order police will remain in the area.