By 8pm, Hangberg residents were clashing with the police and some properties had also been set alight. 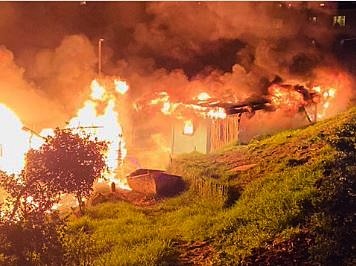 A crèche was burnt down after Hangberg residents in Hout Bay, Cape Town, clashed with the police in retaliation for the tearing down of structures on Friday evening.

Videos and images supplied to News24 showed a large police and law enforcement presence in the fishing community.

This followed an incident last week when an incomplete structure built by a resident was torn down due to it being built “illegally”, the city said.

On Friday, residents were reportedly angered after the semi-completed home was again torn down.

According to the police, residents retaliated after the structure was demolished.

Burnt to the ground

Liezl Mathews, who owns Little Angels Educare Centre, said her property was burnt to the ground.

“My place was burnt to the ground. The police have asked me to stay safe with my family.”

Mathews added she had reported the matter to the police who advised her to stay safe at home.

According to a resident, who did not want to be identified, clashes broke out after irate residents vented their anger at law enforcement agencies.

“What the Red Ants did is very wrong. They have been targeting this family since last week. Last week, they came in the area and demolished their shack.

“On Tuesday, the family then rebuilt their home only for it to be destroyed again today by the Red Ants. People became angry and burnt a nearby crèche and an electricity depot which is under construction.”

He said by 8pm, residents were clashing with the police and some properties had also been set alight.

Police spokesperson Colonel Andrè Traut said officers were deployed to the area after a riotous situation was sparked by a housing dispute.

“The local community retaliated when illegal structures were demolished by the City of Cape Town earlier today [Friday]. Buildings were set alight and damage to infrastructure has being caused.

“The circumstances surrounding the public violence are being investigated and no one has been arrested as yet. Our members will remain in the area to maintain law and order until tranquility has been restored,” he added.

Last week, the police and residents also clashed after the half-built structure was torn down, News24 reported.

GroundUp reported last week that it was being built by a man whose family has lived in Hangberg for two decades. They stay opposite the plot of the land. He was handed a notice on 3 June to remove the structure from the City-owned land.

Councillor Rob Quintas said no one was being evicted, but rather only illegal, unoccupied and incomplete structures were being demolished.

The mayoral committee member for human settlements, Malusi Booi, said one of the structures was a half-built brick and cement foundation.

He added the City was legally allowed to prevent land invasions, and condemned violent protest action.

“The City cannot allow for the illegal occupation of land. Those inhabitants will not have services and often settle on land that is flood-prone as we can see across the metro currently as well.”

Soldiers could be deployed to assist police on voting day, says Bheki Cele
22 hours ago
22 hours ago

Soldiers could be deployed to assist police on voting day, says Bheki Cele
22 hours ago
22 hours ago