‘We must emerge stronger’: Ramaphosa calls for unity after protests

'We all admit there were lapses, we will gather ourselves and do a proper review', Ramaphosa said on Sunday. 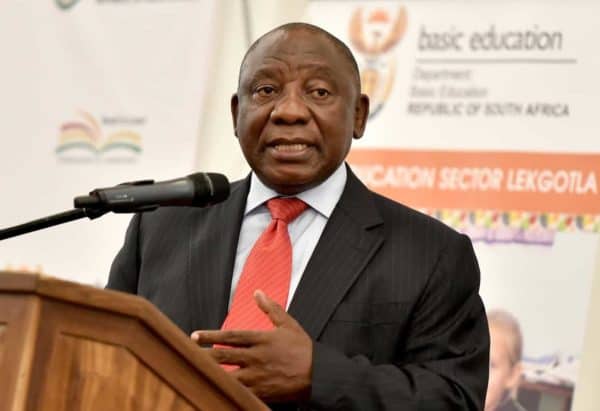 The country was gripped by more than a week of chaos in which more than 200 people were killed as looters ransacked shopping centres and rioters torched key industrial infrastructure and blocked trade routes.

The violence was the worst in post-apartheid South Africa and was sparked after former President Jacob Zuma was sentenced to 15 months in jail on 8 July for snubbing a corruption inquiry. The protests widened into grievances over longstanding poverty and inequality.

His trial for corruption in a separate case is due to resume on Monday.

On Sunday, Ramaphosa, who has faced criticism over the response to the violence, told a crowd outside a mall in the Soweto township:

“We all admit there were lapses […] we will gather ourselves and do a proper review.”

“People want to defend what we have in the form of democracy, our constitution and economy.”

He also called for unity: “We must emerge after this much, much stronger and much more capable than we were before this incident happened.”

Ramaphosa is under mounting pressure as only one of the suspected ringleaders of what officials have called an attempted “insurrection”, which caused an estimated $1bn of damage, has been arrested.

When asked if he would shake up his ministers responsible for security he said: “We are reviewing the situation, yes.”

“He had said that it was ethnically-based and today he used his address to say that there was no link to ethnicity and the riots, and that notion was out the window,” Miller said.

She went on to say that there was a lot of “finger-pointing” between the military and the police.

“There has been criticism that there wasn’t enough intelligence passed on to police, in particular, to respond adequately to the riots,” Miller said.

“Police have said they were overwhelmed and didn’t have the capacity to deal adequately with what had happened.” ‘Vigilante acts’

Access to basic necessities like food has become a pressing issue in the areas affected by looting, arson and violence as many stores were destroyed while others remain closed.

Many in the worst-hit KwaZulu-Natal (KZN) province are now going hungry.

At a branch of the Grace family church in Durban, trestle tables were piled high with donated fresh vegetables and bread to prepare food parcels for those in need of food.

Meanwhile, Police Minister Bheki Cele has warned against “vigilante acts” after residents of Phoenix outside Durban, a township of mostly Indian-origin South Africans were accused of victimising their Black counterparts.

“If we hear that people are being racially profiled at roadblocks set up in the area … [people] including police, are being intimidated, violated and in extreme cases people are being beaten up, and their cars are searched and torched [this] is simply criminal and won’t be tolerated,” he said in a statement late on Saturday.

A task force of 10 detectives would be deployed to the area to investigate the deaths of 20 people during the mayhem, he added.

Of the 212 people reported killed nationwide, some were shot and others died in looting stampedes.

Alongside the human and economic toll, officials closed several beaches around Durban warning of possible contamination after a chemical spill at a factory set ablaze during the mayhem.

On Sunday, Ramaphosa visited malls in Soweto township, the most populous part of Gauteng province – the country’s economic powerhouse – which also saw rioting and looting, to support business owners with clean-up efforts.

“The leadership of the [governing] African National Congress (ANC) will assess the damage caused by the recent looting and vandalism and to engage communities and various stakeholders in the rebuilding and reconstruction programme,” the party said in a statement. ‘Still scared’

Sunday marks Mandela Day, in honour of democratic South Africa’s first President Nelson Mandela, and would be a day of jubilation for the ANC under normal circumstances.

Pope Francis prayed for South Africa on Sunday, saying that violence had rocked the country “already hit by health and economic challenges because of the pandemic”.

Many in the industry, particularly tourism which accounts for 7% of gross domestic product (GDP), worry that the violence will damage South Africa’s reputation and set back economic progress.

AFP reported that traffic was back to normal on Sunday along the main highway linking the country’s north to the Port of Durban which had been closed for days.

“In as much as we are over the hurdle now, we are still scared,” Zanele Khomo of the Durban Chamber of Commerce and Industry told AFP.

“The world is looking at us with those (negative) eyes, but we want to tell them that South Africa has a lot of good people and we have a lot of good stories to tell,” said Siyanda Nxumalo, a headteacher in Durban, who helped to clear up the Dube Village Mall outside Durban following the unrest.