Another Numsa strike planned for today 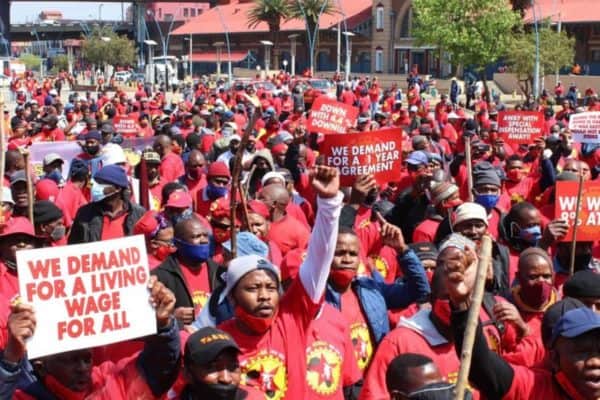 Members of the National Union of Metalworkers of South Africa (Numsa) are staging another protest geared towards the engineering sector, this time in the Sedibeng region in Gauteng.

The latest protest will be staged at steel and engineering company SA Steel Mills’ premises in Meyerton, Vereeniging.

The union said in a statement the company was “undermining collective bargaining by using scab labour”.

Numsa deadlocked with employers in the engineering industry during wage negotiations last week.

They are demanding an 8% increase across the board for the first year, and a CPI+2% improvement factor for the second and third years of employment.

Steel factories were virtually empty due to thousands of workers attending rallies in Durban, the Northern Cape, Johannesburg, the Eastern and Western Cape last week.

Members are expected to demonstrate peacefully outside the company’s gates from 10 am, “to highlight the ongoing engineering strike and the demands which workers are making.”

On Monday, Numsa members picketed outside Spot On Dry Cleaners & Launderers in Johannesburg, due to the company’s refusal to grant the union organisational rights.

On the same day, it was also revealed that Numsa was studying a new offer from the Steel and Engineering Industries Federation of South Africa (Seifsa).

Numsa spokesperson Phakamile Hlubi-Majola said the union was receiving responses from regions on their proposal.

However, until an agreement is reached, Numsa pickets are continuing.

Issues could also still arise due to the National Employers’ Association of South Africa’s (Neasa) opposition to Numsa’s “one-size-fits-all” approach.

Neasa employs the largest amount of workers in the steel industry in the country.