The truck drivers are demanding to see Transport Minister Fikile Mbalula over their unhappiness about foreign drivers working in the country. 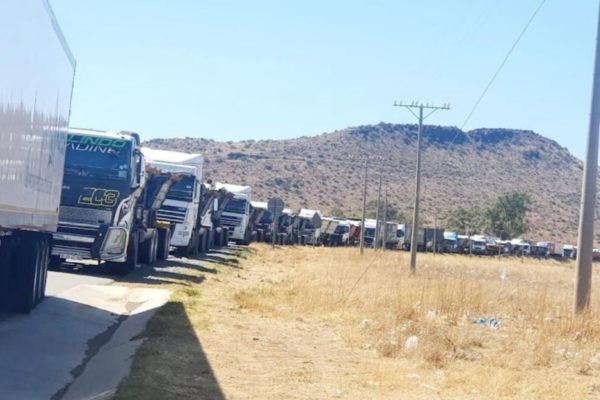 Truck drivers have backed up traffic by more than a kilometre in both directions on the N3 highway. Photo: Twitter/@PRSolutions_ZA

The N3 highway is being blocked by truck drivers in both directions near Montrose, in the Free State, while an accident on the N5 near Harrismith claimed two lives after a truck blocked the road.

The drivers are reportedly unhappy about foreign drivers working in South Africa.

The accident on the N5 happened after a coal truck was left on the road to block traffic. Another truck carrying maize collided with the coal truck already blocking the road. The maize truck then hit a bus and a taxi.

“In the process, the truck carrying maize veered off the road and landed on the shoulder of the road where the driver sustained serious injuries,” said Free State police spokesperson Brigadier Motantsi Makhele.

“A woman from the bus, sustained minor injuries while two people in the taxi died on impact.”

Earlier on Tuesday, the N3 Toll Concession tweeted that the road had been closed and there was a traffic backlog between Harrismith and Van Reenen’s Pass.

According to Arrive Alive, the Road Traffic Inspectorate (RTI) and South African Police Service (Saps) are diverting traffic travelling towards Gauteng at Bergville Interchange. Cars are also being diverted at Frere Interchange.

According to reports, about 30 truck drivers earlier on Tuesday stopped their trucks on both sides of the N3, preventing any traffic from passing. Traffic is backed up by more than a kilometre in both directions.

The N3 Toll Concession urged motorists to delay travelling on the highway between Tugela Plaza and Harrismith.

“Their main grievance is foreign truck drivers being allowed to drive trucks in the country. The drivers are peaceful and just standing around. No acts of violence have been reported,” Makhele said.

Tuesday’s protest on the N3 comes after truck drivers in the Eastern Cape were prevented from driving on the N9 and N10 highways outside Middelburg.

Mbalula met with the protesting truck drivers on Monday and accepted their memorandum of demands.

Mbalula and the truck drivers agreed to set up a technical team that will engage with government on the issues that the drivers are facing. The technical team also agreed to report back within seven working days.