Parliament could have done more on Gupta leaks, says Ramaphosa

'Leaked emails provided substantive information that MPs could have followed through.' 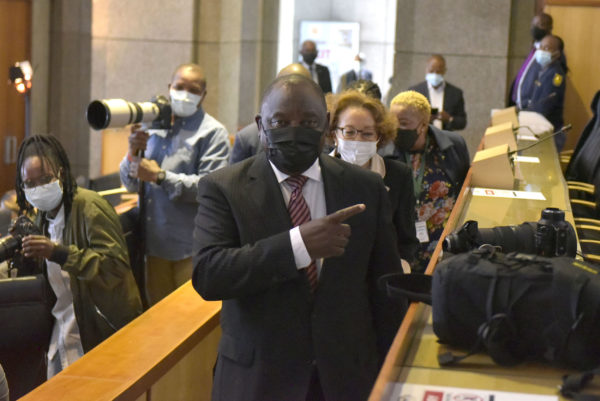 South African President Cyril Ramaphosa at the Zondo commission in his capacity as the president of the ANC. Picture: Neil McCartney

President Cyril Ramaphosa has conceded that Parliament had the ability to investigate allegations of state capture levelled against the Gupta family during former president Jacob Zuma’s time in office.

Ramaphosa on Thursday returned to the Commission of Inquiry into Allegations of State Capture for his second day of testimony in his capacity as ANC president.

He told the commission although the ANC did not have the capacity to investigate allegations of state capture at the time, Parliament could have investigated the veracity of the claims against Zuma and the Guptas that had been in the public domain for more than five years.

Ramaphosa agreed that Parliament dropped the ball when it came to carrying out its oversight responsibilities.

He said the Gupta emails provided much more substantive information that MPs could have followed through.

“When it comes to allegations of this nature, I would say it is the governing party that should activate its own processes. And I guess where it fails, it needs to then rely on parliamentary processes or structures that would need to go beyond just newspaper articles. There would need to be much more substantive information, which is why the Gupta email saga presented much more weighty information that needed to be followed up.

“So, it was no longer allegations, there was real substantive, documents [and] what amounted or appeared to be real evidence that could be followed through,” Ramaphosa said.

The president was responding to a question from the commission’s evidence leader, advocate Alec Freund, who asked whether the ANC through its action or inaction enabled state capture by not exercising its parliamentary powers.

The email cache exposed the extent of the Gupta family’s influence over state procurement processes and the appointment of key officials to state-owned enterprises.

In his previous testimony to the commission, Frolick said that some time in October or November 2017, Ramaphosa addressed the ANC’s parliamentary caucus at the height of state capture allegations.

Ramaphosa told the commission his address was in his capacity as the chairperson of the ANC’s political committee.

The ANC structure is chaired and convened by the ANC’s deputy president and provides guidance on the work of the party’s MPs.

Ramaphosa said the meeting was prompted by the release of the Gupta leaks and a decision by the ANC at its December 2012 national conference to have their MPs play a much more “activist role”.

“The Gupta emails were a flood of evidence that required Parliament to start doing its work,” he said.

ANC must humble itself and own failures at local government, says analyst
7 hours ago
7 hours ago

ANC must humble itself and own failures at local government, says analyst
7 hours ago
7 hours ago