Zondo recommends that a legal opinion be sought on how to recoup public funds from Magashule and Zwane. 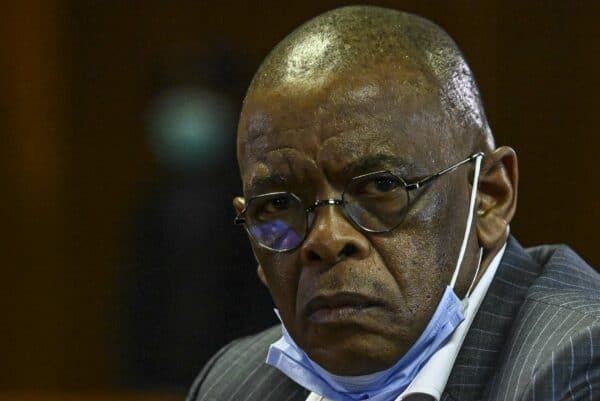 The State Capture Commission has recommended that former Free State Agriculture MEC Mosebenzi Zwane and ex-premier and corruption-accused Ace Magashule be investigated for their roles in the botched Estina dairy farm project that saw over R200 million paid to companies linked to the Gupta family.

The commission found that all role players in the Free State project did the bidding of the Gupta family without any care for public funds or poor residents who should have benefited from the dairy farm project Zwane had promised them.

The report further recommends that a legal opinion be sought on how to recoup the looted public funds from Magashule and Zwane.

Furthermore, law enforcement agencies should also determine whether the duo broke any laws when they established and funded the failed dairy project intended to uplift black farmers in Zwane’s hometown Vrede.

“Law enforcement agencies should conduct such further investigations as may be necessary, whether any member of the Gupta family, including Mr Tony Gupta, associates including Mr Nayaran and Estina directors are guilty of any offence with a view to enabling the NPA to consider bringing criminal charges against any one of them if it has not already done so,” the commission said.

The Gupta brothers, accused of being the architects of the country’s biggest corruption scandal of state capture, were arrested in the United Arab Emirates three weeks ago by Interpol.

Rajesh ‘Tony’ and his brother Atul Gupta were nabbed for the R24.9 million Nulane Investment fraud and money laundering case.

The South African government had been in talks with the UAE for the extradition of the brothers so they can stand trial on fraud charges.

ALSO READ: Witness worried he may be shot if he drops Gupta dairy farm names

Zondo found that he failed to comply with public finance regulations, recommending that he be held criminally liable for the graft.

“The diary project failed in its first two years of operation, because of Mr Thabethe’s incompetence and because he was carrying out the Guptas’ agenda and cared less about taxpayers and black farmers.

“Apart from everything else, Mr Thabethe must be held criminally liable for his role in causing the department to lose so many millions in taxpayers’ money.”

By the time the project was cancelled in 2014, R280 million had already been siphoned from Free State coffers. Millions more were paid to Estina until 2016 even after the project had been halted.

The payments continued on Thabethe’s insistence that Estina had “met key deliverables” under the contract.

Additionally, Thabethe should be sued for recovery of the public funds lost through Estina farm, the report recommended.

Money laundered from the Free State paid for the Gupta family’s wedding at Sun City resort in 2013.

Zwane’s close relationship with Rajesh ‘Tony’ Gupta dated as far back as 2010/2011. His prominence in the project was contained in witnesses’ testimonies at the commission.

“With regard to the Estina project, he [Zwane] particularly made strategic interventions that made it possible for the project to benefit the Guptas,” the report stated.

Another official who facilitated payments to the Guptas via Estina was former Finance MEC Elizabeth Rockman, who met frequently with the family.

She had earlier, in 2010, been introduced to the family’s media pet project, the now defunct New Age newspaper, with the view of securing a subscription and a slice of the advertisement budget.

Rockman testified that Magashule knew about her meetings with the Gupta family and was aware of what was being discussed.

The report recommended implementation of lifestyle audits for all senior managers, members of the provincial executive and officials involved in supply chain management.

“The whole diary project failed because Mr Thabethe dismally failed to do his job and failed to protect the interests of the department and taxpayers’ monies.

“It also happened because Mr Mosebenzi Zwane as MEC was pursuing the Guptas’ agenda and did not do his job to perform oversight over Mr Thabethe.

“The premier of the province at the time Mr Ace Magashule would have also been pursuing the agenda of the Guptas.”

Investigators found out that Gupta lackey and Estina’s sole director Kamal Vasram was previously retail sales manager at the family’s Sahara Computers, and had no experience in agriculture or farming.

“Absent fraud committed against the government, then all those involved corroborated and colluded in siphoning and channelling public funds to an incompetent entity without a shed of accountability. The official decision makers become the fraudsters,” the report concluded.

In February, Vasram was arrested on various fraud charges and Contravening the International Trade Administration Act and the Exchange Control Act, along with another Gupta associate Saliesh Indurjeeth. They were nabbed after an investigation by SARS and the NPA’s Investigating Directorate (ID) into the affairs of the Estina project.