Veteran slips to eighth in the overall Dakar standings but Rob Howie flies SA's flag high with his best stage yet. 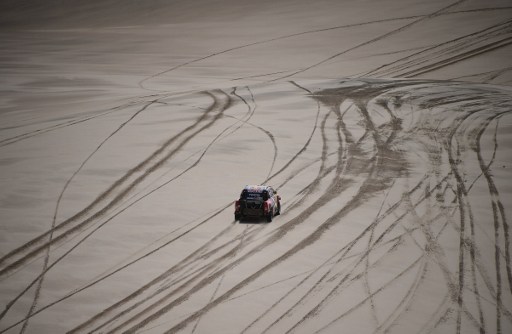 It was a tough day for Giniel de Villiers in the Dakar rally. Photo: Franck Fife/AFP.

After another rough day, South African driver Giniel de Villiers slipped one place to eighth in the general rankings at the Dakar Rally, as the race made its way through Bolivia.

De Villiers was 10th fastest through the timed section on Friday’s fifth stage, which was shortened significantly by organisers due to torrential rain, with the 44-year-old former champion losing further ground on overall leader Stephane Peterhansel.

The Frenchman, turning out for Peugeot, was more than an hour clear of South Africa’s lone podium prospect with seven stages left.

“The navigation today was extremely tricky and we lost a lot of time,” De Villiers said.

“To make things even tougher, the weather wreaked havoc.”

Remaining in contention up front, Spaniard Nani Roma was leading the local Toyota Gazoo Racing SA outfit, with teammate De Villiers fighting to get back in the race.

South African co-driver Rob Howie and Zimbabwean Conrad Rautenbach had their best stage thus far, grabbing sixth spot as they clawed their way up three positions to 15th in the standings.

On the bikes, David Thomas, who had led the SA charge from the start and was lying 67th overnight, joined compatriot Walter Terblanche on the sidelines of the gruelling contest.

Joey Evans, the only SA rider left in the race, finished 91st on the stage.

He was in 102nd position overall, nearly 11 hours behind new leader and fellow KTM rider Sam Sunderland of Great Britain.

The 786km sixth stage on Saturday, which includes a 527km special section, starts in Oruro and ends in La Paz.