South African clings on to his sixth position overall as stage nine is cancelled due to a massive rain-induced landslide. 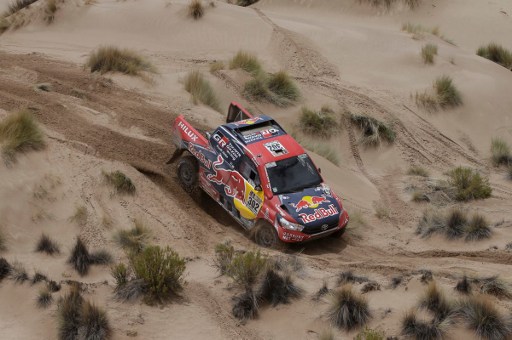 While he lost further ground on the front runners, Giniel de Villiers produced another solid performance on Tuesday, as he continued to carry the South African flag by retaining sixth place overall at the Dakar Rally.

De Villiers and German co-driver Dirk von Zitzewitz finished fifth on stage eight between Uyuni and Salta, and they were 1:21:44 behind Frenchman Sebastien Loeb, who took the overall lead from compatriot and Peugeot teammate Stephane Peterhansel as they took advantage of the final high-altitude marathon leg.

Making things more difficult for the Toyota outfit on the gruelling route, with this year’s race being hammered by poor weather conditions, they were forced to complete an entire service on the side of the road near the town of Abra Pampa after a landslide prohibited them from reaching the official bivouac at Salta.

“Neither of the two Toyota Hilux race vehicles required serious repairs after stage eight,” the local outfit said in a statement.

“This was a relief for the technical crews, who found themselves facing not only a roadside service, but also a massive drive over treacherous terrain to reach the bivouac in the early hours of (Wednesday) morning.”

South African Rob Howie, turning out as a co-driver with Zimbabwean Conrad Rautenbach, was ninth on the stage and 13th overall.

In the bike division, lone SA rider Joey Evans finished 96th on stage as he climbed to 98th place in the general rankings.

He was more than 15 hours behind race leader and fellow KTM rider Sam Sunderland of Great Britain.

With numerous race and support crews stuck away from the bivouac after stage eight, the organisers opted to cancel stage nine.

All crews would follow the liaison route to Chilecito, with three stages left, as the race prepared to move from Argentina to Puerto Rico.

Thursday’s 10th stage, covering 751km from Chilecito to San Juan, would include a 449km timed section.