Guts not enough for Proteas to threaten Australia

Mistakes at vital moments in Quad Series undermine South Africa's netballers as the gap in professionalism is illustrated again. 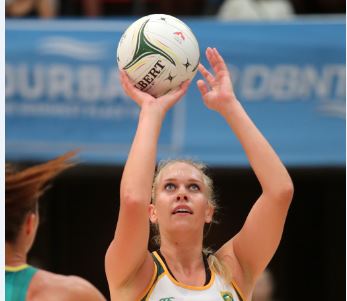 Despite producing another gutsy performance, South Africa were handed a 62-46 defeat by world champions Australia in the final match of the third leg of the Quad Series netball competition in Durban on Tuesday night.

The 16-point gap was the closest ever margin of defeat between the Diamonds, a fully professional team, and the Proteas, a fully amateur side.

Also read: Gritty Proteas ever so close to upsetting England

“We made a lot of mistakes and we were pretty green on a few things, but we were in there,” said SA head coach Norma Plummer.

“We need to be consistent, and there’s still a lot of work to do, but I’m quietly pleased.”

The Australians romped to a 5-0 lead after four minutes, taking advantage of a sloppy start by the hosts, before the South Africans started to hit back.

Vanes-Mari du Toit, making a comeback to the national team at goal attack after a lengthy layoff, struggled against the Australian defence and the home side were trailing 17-9 at the end of the first quarter.

After she was replaced, in-form Lindie Lombard was able to keep the Diamonds on their toes, but while the South Africans put up a fight, they slipped further behind as Australia took a 31-20 advantage into the half-time break.

Gradually taking control, the Diamonds drew clear in the last two quarters to earn a comfortable victory, extending their lead at the top of the series standings.

South Africa remained without a win after five matches in the inaugural four-nation campaign, with one fixture left against New Zealand in England on Sunday.