With the Bulls announcing Handre Pollard's out for up to 10 weeks, the teenager now might have to don the Boks' flyhalf jersey. 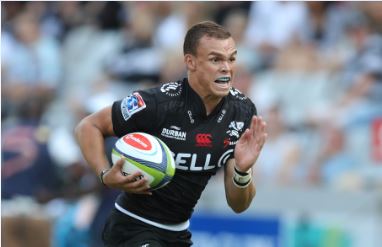 Curwin Bosch was only moved to flyhalf again for Saturday’s meeting with the Rebels because of injuries in the Sharks’ camp.

It turns out the 19-year-old now probably has to stay in that position for the foreseeable future because he’s now become arguably the most important player in South African rugby this year.

The Bulls on Thursday afternoon announced Handre Pollard injured his ankle at training and requires surgery.

More importantly, Pollard won’t be able to play for the Springboks in June’s Test series against France.

With Pat Lambie still injured, the Lions’ Elton Jantjies is Bosch’s only real competition for the Bok No 10 jersey.

He’s rotated between fullback and flyhalf to date in the Super Rugby campaign.

“The question of what’s Curwin’s best position is a tricky one,” said Du Preez on Thursday.

“When we initially brought him into the setup, we wanted him at fullback. That position gives him a bit more space. But he’s grown a lot already and he’s actually quite relaxed on where he plays.”

That attitude explains why Bosch has found it relatively easy to play flyhalf in such a tough competition.

His decision-making has been sound and his goalkicking arguably the best in South Africa this year.

“Curwin’s attitude is great. When I sat down with him earlier this week, I told him he’d probably have to go back to fullback because of Garth April’s injury,” said Du Preez.

“He was more than willing to despite being at flyhalf for a few games. But we had to keep him at 10 when Inny Radebe injured himself in training this week.”

However, the Sharks mentor admits that it’s becoming important for Bosch to settle in one position.

“In future, it’s probably not going to be ideal to keep on switching him between positions,” said Du Preez.

“But he really does slot into anywhere easily.”

Given the Boks’ demands, that will have to be flyhalf.