The precociously talented keeper-batter leads the nominations for the CSA awards. There's many reasons for that. 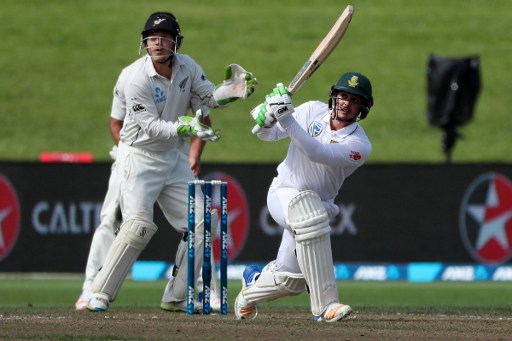 Quinton de Kock has been a massive presence for the Proteas. Photo: Fiona Goodall/AFP.

The Proteas undoubtedly had a brilliant summer and various heroes to go with that.

But there’s a reason why Quinton de Kock received the most nominations for Cricket South Africa’s annual awards – four, including Cricketer of the Year.

The 24-year-old wicketkeeper-batsman truly was a rock for South Africa over the last 10 months.

Yet those impressive stats still don’t paint an accurate picture because the context of De Kock’s performances are key to understanding why he simply was the best.

It was his brutal 178 against the Australians at Centurion that gave the Proteas the confidence for an eventual 5-0 series whitewash.

De Kock scored the 84 in the first Test at Perth that kept his side in the picture after the rest struggled and then an attacking 69 that set up a brilliant win.

He then followed it up with 103 in tough conditions in Hobart to help secure a magnificent series win.

New Zealand spinner Jeetan Patel had him in a web during the Test series there before he simply brushed that off to smash 91 in the second Test at Wellington.

It was the key innings that opened the door for another series win and his 90 in Hamilton helped stave off a likely defeat.

Quinton de Kock was the man for a crisis in 2016/17 and delivered like a seasoned pro.

Impressively, he has also become a world-class gloveman.

Kagiso Rabada was also nominated for the main category as well as Test cricketer of the Year for another season of productive spells.

Yet if there’s one man that could challenge De Kock, it’s Faf du Plessis.

The Test skipper has been an outstanding leader and contributed consistently with the bat, including a magnificent 185 in an ODI against Sri Lanka.

“Our country continues to produce world-class players. We only need reflect on the superb way in which Quinton de Kock, Kagiso Rabada, Temba Bavuma and Keshav Maharaj have shone over the past year and who continue to grow alongside established greats like AB de Villiers, Hashim Amla and Dale Steyn,” said Haroon Lorgat, CSA’s chief executive.