No luck for Wayde but tannie Ans rewarded

South Africa's sprinting kingpin misses out on the IAAF world athlete of the year award. 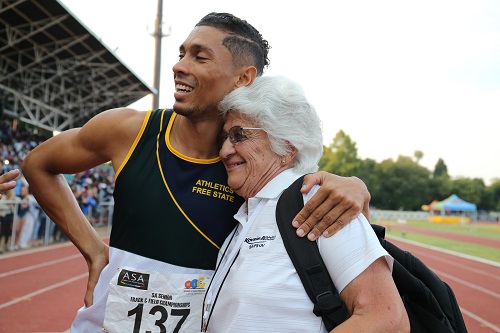 Sprinter Wayde van Niekerk missed out on another accolade last night, though there was recognition for his coach Ans Botha at the International Association of Athletics Federations (IAAF) Awards in Monaco.

Van Niekerk was overlooked for the award for the second year in a row, after being shortlisted among three finalists for men’s World Athlete of the Year, extending his dry run off the track after he lost out at the SA Sports Awards earlier this month.

The 25-year-old rocket from Bloemfontein was hoping to become the first South African athlete to receive the World Athlete of the Year trophy since high jumper Hestrie Cloete in 2003, after a campaign which included gold and silver medals in the 400m and 200m events at the World Championships in London in August and a 300m world best of 30.81 in Ostrava in June.

The prestigious award was presented to world high jump champion Mutaz Essa Barshim of Qatar, who achieved 10 of the 13 best leaps produced on the international circuit this season.

Botha, meanwhile, was recognised for her lengthy contribution as a coach.

Utilising her vast experience, she guided the country’s most prominent track athlete to two world titles, an Olympic gold medal and a world record over the 400m distance in the last three years.

After nearly five decades of service to the sport, Botha said she was still eager to mentor young athletes as well as the global elite.

“If you don’t have love for what you do, a passion and enthusiasm, I don’t think you will persevere for nearly 50 years,” she said.