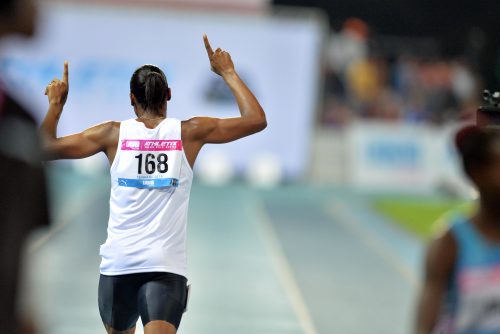 Having smashed one record in the early stages of the 2018 campaign, Caster Semenya has hinted that more could be on the cards as she winds up the pace ahead of next month’s Commonwealth Games.

Semenya stormed home in 2:35.43 in Pretoria on Thursday night to shatter the longest standing record in the South African track and field books (2:37.20) which had been held by Ilze Wicksell for more than 35 years.

While it was pointed out to her after the race that she had hardly broken a sweat, Semenya shrugged off her evidently sublime form.

“In the race we focus on relaxing as much as we can, and it’s all about execution,” she said.

“We trained for it, and we’ve done it, so now we just look forward to what we can do in the next races.”

Though she was set to target 800m and 1 500m gold at the national championships in Pretoria next week, in preparation for her double charge at the Gold Coast Games, she was unlikely to set the track alight over either distance at the high-altitude event.

And while she was better known for her exploits over two laps, Semenya’s next SA record could fall in the 1 500m event when she turns out at the third and final leg of the Liquid Telecom Athletix Grand Prix in Paarl later this month.

Faced with another potential confidence booster in the build-up to the international season, in her current form she could threaten not only her personal best of 4:01.99, but also Zola Budd’s 34-year-old national mark of 4:01.81.

“We’re concentrating on middle distances now, and we try by all means to be better at each and every race that we run,” said the world and Olympic champion.

“I just hope we can balance that, and then we’ll see what we can do.”