Henri Schoeman: ‘This means everything to me’

The local triathlete, following a bronze at the Olympics, is rapidly becoming a medal glutton after his Commonwealth Games gold. 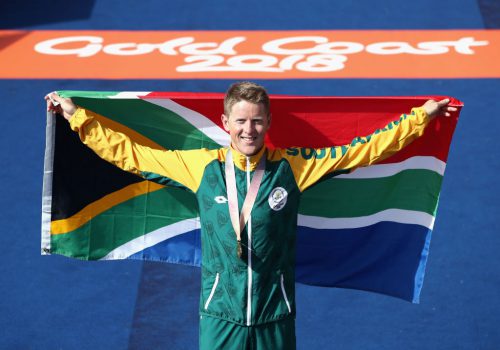 Gold medalist Henri Schoeman of South Africa celebrates during the medal ceremony for the during the Men's Triathlon on day one of the Gold Coast 2018 Commonwealth Games at Southport Broadwater Parklands on April 5, 2018 on the Gold Coast, Australia. (Photo by Phil Walter/Getty Images)

Henri Schoeman was celebrating a runaway victory on Thursday, after breaking clear on the final leg to win the men’s triathlon on the opening day of competition at the Commonwealth Games on Australia’s Gold Coast.

Schoeman, who earned the Olympic bronze medal in Rio two years ago, was up front from the start, exiting the water among the leaders.

After joining a break on the bike leg, he slammed it down on the run to secure gold in the sprint race in 52:31, finishing seven seconds ahead of Australian silver medallist Jacob Birtwhistle.

“This means everything to me,” Schoeman said after securing the SA team’s first medal of the Games.

“Two years ago I was an Olympic medallist and now Commonwealth champion.

“It’s just such a fantastic feeling and I’m so happy that I could do this for my country, my supporters, my family and my girlfriend.”

Richard Murray, the bronze medallist at the Glasgow Games four years ago, settled for sixth place in the men’s race, and Gillian Sanders was the best of the South Africans in the women’s contest, finishing in 15th position.

Schoeman, Murray and Sanders were set to join Simone Ackermann in the mixed relay race on Saturday.