Africa's fastest man triumphs in a thrilling 100m battle as Team SA claim a 1-2 finish on a day where Chad le Clos and co helped rake in another seven medals. 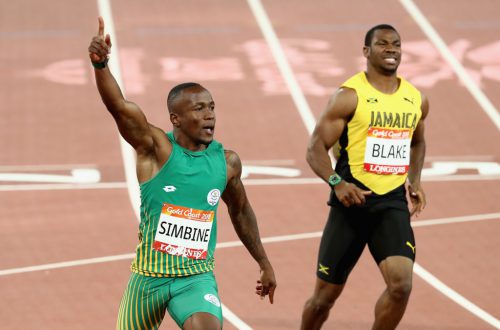 South Africa raked in nine medals on Monday at the Gold Coast Commonwealth Games, on what will go down as one of the most memorable all-round performances by the national team at a multi-sport showpiece.

Earning four medals in track and field, four more in the swimming pool and one in lawn bowls, they rocketed three places up the table to fifth overall with a total of 18 medals including eight gold after five days of competition.

On the track, sprinters Akani Simbine and Henricho Bruintjies scorched to gold and silver in the men’s 100m final, clocking 10.03 and 10.17 respectively.

“It’s been a long time coming to have two South Africans on the podium on the international stage,” Simbine said.

“It’s really great for us to come here and show up.”

Chad le Clos cruised to his fourth podium place, wrapping up the 50m, 100m and 200m butterfly treble by touching first in 50.65 over two lengths.

“Adam and I have had a really good rivalry, and he’s been able to get on top of me the last couple of years, so to see my national flag up there and hearing my national anthem being played will be one of the highlights of my career,” Van der Burgh said.

“This medal is amazing. I didn’t think I’d ever medal in the 100m,” Schoenmaker said.

Earlier in the pool, Christian Sadie earned silver in the men’s S7 freestyle in 29.65.

On the bowls green, the women’s fours team of Esme Kruger, Nicolene Neale, Johanna Snyman and Elma Davis went down fighting in an 18-16 defeat to Australia in the playoffs, securing the silver medal.

Elsewhere, the national women’s hockey side beat Wales 2-0, climbing to third place in Pool A. They needed to beat India in their last group match on Tuesday to progress to the semifinals and keep their medal hopes alive.