The Lions won’t win trophies until they change

The successful blueprint they've been following over the last five years is exactly what will keep making them bridesmaids. 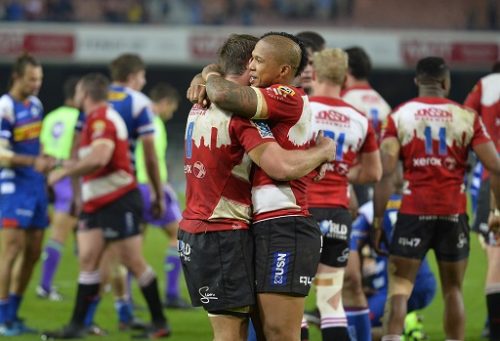 Elton Jantjies of the Lions and team mates celebrate during the Super Rugby match between DHL Stormers and Emirates Lions at DHL Newlands Stadium on May 26, 2018 in Cape Town, South Africa. (Photo by Ashley Vlotman/Gallo Images)

We can be proud of the Lions reaching a third successive Super Rugby final.

And the really great thing about their march to the showpiece game is how they’ve done it.

They had less log points than the Hurricanes and Chiefs and had to endure criticism for not “deserving” their position on the overall log.

But with a calm determination they shrugged off all the noise and, essentially, just dealt with what they had in front of them.

However, they won’t win today’s final against the Crusaders in Christchurch.

Of that I’m certain.

The Lions’ greatest strength is also their primary weakness when it comes to top-class opposition.

Throughout the season, De Bruin has reiterated that his charges want to stay true to themselves and continue to score the most tries in the tournament.

Also, they want to inspire the broader public through the way they play.

“We’re definitely going to make mistakes, but that’s what this team stands for. When we make them, we fix them,” Elton Jantjies said earlier this week.

“The past few weeks we’ve made them in the first 10 minutes and many people feel that it’s a poor start but we don’t see it that way. There are still 70 minutes left.”

It doesn’t win you trophies though.

That’s my biggest reservation about this team.

When does staying true to yourself become inflexible?

To what extent can a professional team marry inspiring people with sporting excellence?

How long can the Lions claim success despite remaining trophy-less?

Don’t be fooled by people who argue the Crusaders play a similar game.

Scott Robertson’s troops play a deluxe version of the Springboks at their best under Jake White and (to an extent) Peter de Villiers.

Their set-pieces are great, they’re the best rucking side in the tournament, they suffocate and pressure sides into making mistakes, play in the right areas, kick substantially (fourth most in 2018), defend well and punish turnovers ruthlessly.

The Crusaders are pragmatic and skillful, not wildly exciting.

The Lions, frankly, haven’t shown sufficient evidence that they can be like that.