Ranked 17 places higher than their opponents, the Proteas were relentless from the start in their clash against Botswana. 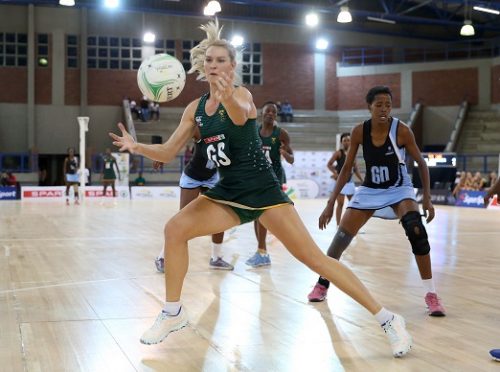 Lenize Potgieter of the Spar Proteas in action against Botswana during day 2 of the Netball Diamond Challenge at the Ngoaka Ramatlhodi Indoor Sports Centre on November 28, 2018 in Polokwane, South Africa. (Photo by Reg Caldecott/Gallo Images)

Both South African teams remained unbeaten on Wednesday, after sweeping aside their opposition on day two of the Diamond Challenge international netball series in Polokwane.

Ranked 17 places higher than their opponents, the Proteas were relentless from the start in their clash against Botswana, ultimately charging to a dominant 83-16 win.

Holding nothing back in the early stages, as they continued their preparations for the 2019 World Cup, the hosts were 19-2 ahead at the end of the first quarter and they held a significant lead of 38-7 at half-time.

Unable to produce a significant challenge, Botswana trailed 58-12 heading into the final stanza, and they ultimately lost by 67 points.

Earlier, the SA Presidents XII raced to a commanding win over Namibia.

The national invitation side, which consisted largely of Under-21 players, received little resistance throughout the match and romped to a 61-31 victory over their lowly ranked opponents.

Botswana and Namibia, who were both ranked outside the top 20 teams in the world, were the only sides in the six-team Diamond Challenge tournament who remained without a win, with three days of competition remaining.

Meanwhile, Zambia fought back from a narrow deficit in the early stages to secure a 57-51 victory in a hard-fought battle against a higher-ranked Zimbabwe team.

Zambia earned their maiden victory of the tournament, handing the Zimbabweans their first defeat in the process.

On Thursday, the Proteas were expected to face perhaps their stiffest challenge of the series in their derby clash against the SA Presidents team, scheduled to start at 3pm.

Their match was set to be followed by a 5pm contest between Botswana and Zambia, while Namibia were up against Zimbabwe in the final game of the day at 7pm.