There were some concerns in the build-up to the 2019 World Championships and the 2020 Olympics, but the sport in general was in a good space. 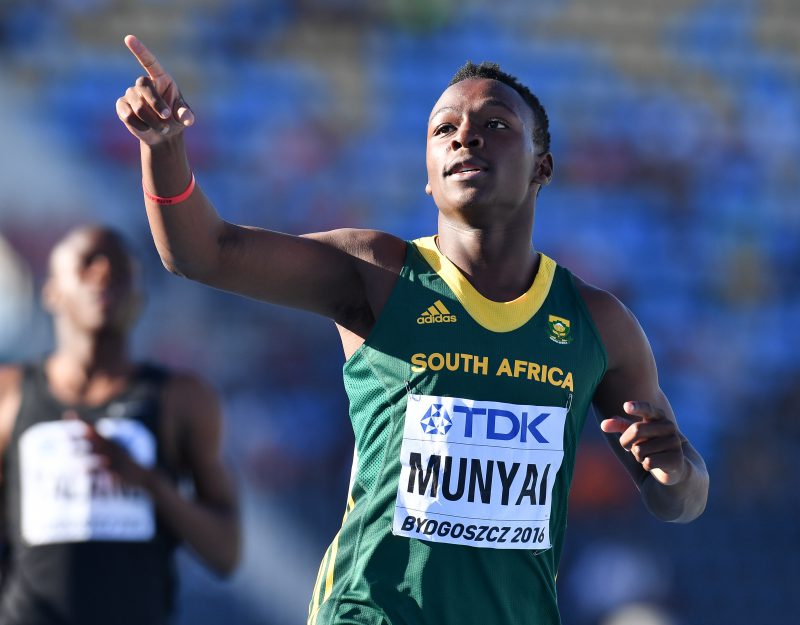 It was another great season for South African athletics, with the nation’s elite stars experiencing more ups than downs.

There were some concerns in the build-up to the 2019 World Championships and the 2020 Olympics, but the sport in general was in a good space, as was evident throughout a memorable 2018 campaign.

Though his international season was ultimately derailed by injury, sprint prospect Clarence Munyai produced an explosive performance during the domestic campaign which made heads turn around the world. In the 200m semifinals at the national championships, held on the lightning fast Tuks track in March, the 20-year-old athlete scorched across the line in 19.69 seconds. He ripped 0.15 off Wayde van Niekerk’s national record, climbing to 10th place on the global all-time list over the half-lap distance.

As much as the nation’s top speedsters continued to shine, with the SA men’s 4x100m relay team showcasing the country’s depth by earning medals at the Commonwealth Games and the African Championships, injuries continued to hamper South Africa’s immense potential in the global sprinting arena. Munyai joined the likes of Van Niekerk, Thando Roto and Gift Leotlela on the sidelines, with a handful of world-class athletes hoping to shake off troublesome niggles ahead of the 2019 season.

With various boardroom battles seemingly put to bed in recent years, as Athletics South Africa found some stability following a troublesome period for the sport, administrative issues resurfaced and gained momentum towards the end of the year. Facing multiple controversies and clashing repeatedly with the national federation, the KwaZulu-Natal Athletics board was suspended. After taking the fight to court in an unsuccessful attempt to have the decision overturned, the KZNA executive was facing an independent investigation in the new year.

While she was snubbed at the season-ending IAAF Awards, Caster Semenya enjoyed a near flawless campaign, flaunting her remarkable ability over a wide range of distances. She opened her season with 800m and 1 500m gold medals at the Commonwealth Games and went on to win the 400m and 800m titles at the African Championships, as well as 800m gold and 400m silver at the Continental Cup. Semenya also retained her Diamond League 800m crown and went unbeaten over the two-lap distance for the third year in a row.

It was perhaps more disappointing than funny, but the organisation of the African Championships in Asaba was so poor it became comical. A chaotic bottleneck was formed on arrival, with the Lagos airport unable to handle the traffic as multiple teams from around the continent connected through the city. One of the SA team’s hotels would not have looked out of place on the streets of Sodom or Gomorrah, and the track at the stadium was so badly laid that records could not be ratified. It was a championship event that most of the athletes would probably rather forget.