Coach Norma Plummer bows out without a medal as New Zealand stun the all-conquering Aussies in the final. 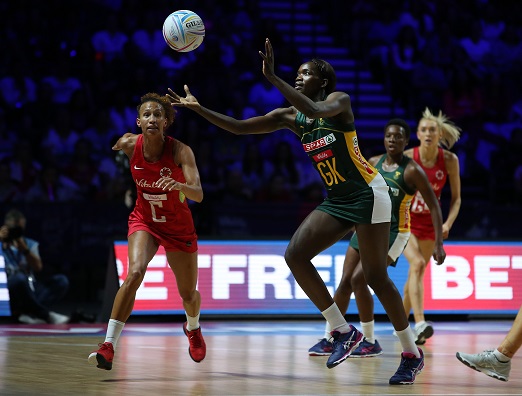 Phumza Maweni of the Proteas and Serena Guthrie of England in action during the Vitality Netball World Cup Bronze Medal match between England and South Africa at M&S Bank Arena on July 21, 2019 in Liverpool, England. (Photo by Reg Caldecott/Gallo Images)

Falling at the final hurdle on Sunday, the Proteas missed out on a historic medal at the Netball World Cup, but head coach Norma Plummer said she couldn’t have asked for much more from the national squad during an impressive campaign in Liverpool.

After reaching the playoffs at the global showpiece for the first time in 24 years, South Africa had taken defending champions Australia to the wire in the semifinals on Saturday.

Aiming for their maiden victory over the Diamonds, they fought for every inch in a memorable battle but the Proteas were edged out in a narrow 55-53 defeat.

Relegated to the bronze medal playoff, they were outclassed by hosts England in a 58-42 loss on Sunday, settling for fourth position.

Though they stayed in touch with the Roses for 10 minutes in the first quarter, the Proteas were below par on attack and defence.

“We always knew it was going to be a battle and England were fantastic in the circle,” Plummer said.

“We were a little less disciplined today.”

An emotional Plummer was nonetheless satisfied with their overall performance at the quadrennial spectacle.

Achieving their best World Cup result since 1995, they also enjoyed a rare victory over giants Jamaica in the group stages, capitalising on the improvement they had made as a squad over the last few years.

With South Africa set to host the next edition of the Netball World Cup, in Cape Town in 2023, they had laid a solid platform to target a podium place on home soil.

And while their lengthy medal drought had been extended, Plummer believed they had displayed their true potential.

“Our mission was to finish in the top four, and we did that, so I’m really proud of this team,” said Plummer, whose contribution had been key to their recent progress.

“It’s been fantastic to work with these athletes. They’ve been phenomenal.”

Meanwhile, in the final on Sunday night, New Zealand beat title favourites Australia 52-51 to reclaim the global title they last won in 2003.