Australia need to win to regain the Border-Gavaskar Trophy but, with more rain forecast for Tuesday, India will fancy their chances of surviving for the draw they need to keep the silverware. 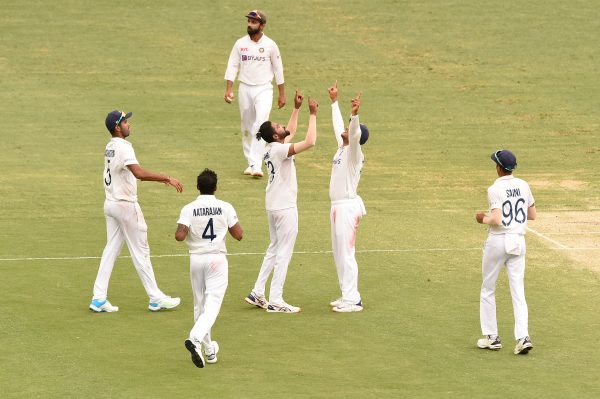 Indian bowler Mohammed Siraj celebrates the wicket of Josh Hazlewood of Australia during day four of the 4th Test in the series between the countries in Brisbane on Monday. Picture: Getty Images

India will need to score 328 runs for victory or bat all day for a draw after bowling Australia out for 294 midway through the final session on day four of the decisive fourth Test at the Gabba on Monday.

Mohammad Siraj had Josh Hazlewood caught on the boundary to end the Australian innings as rain clouds formed over the ground.

Indian openers Rohit Sharma and Shubman Gill then faced just 11 balls, reaching four without loss, before light rain began to fall and play was called off for the day.

Siraj and fellow quick Shardul Thakur were exceptional throughout Monday as they kept the Australian scoring rate largely under control while taking wickets at regular intervals.

Although most of the Australian batting order got starts, only Steve Smith converted and even he fell for 55 when surprised by a Thakur short ball.

Australia need to win to regain the Border-Gavaskar Trophy but, with more rain forecast for Tuesday, India will fancy their chances of surviving for the draw they need to keep the silverware.

The highest run chase to achieve victory at the Gabba is the 236 that Australia scored to beat the West Indies in 1951.

But as India have shown since their disastrous capitulation in the first Test in Adelaide when they were bowled out for 36, they are never out of the contest.

They came back and won the Boxing Day Test in Melbourne then batted for more than day to draw Sydney’s third Test.

“There’s a nice crack forming outside the right-handers’ off stump that he’ll be looking to aim at,” Smith said.

“If he hits good areas consistently tomorrow there is certainly no reason why he can’t create some chances on a day-five wicket, that’s for sure.

“The game’s in a nice place for us – the wicket is starting to play a few tricks,” he added.

“Today a few balls shot up so tomorrow it’s going to be case of hitting the right areas and letting the natural variation of a day five wicket do its work, and hopefully we can hang on to the chances.”

However, India will feel they can at least save the Test against an Australian attack that looked fatigued in the first innings.

India claimed four wickets in the morning session to peg back a flying start by the Australians with David Warner and Marcus Harris taking advantage of some poor bowling.

The Australian openers added 68 runs off 19 overs when, with the score on 89, Harris fell for 38 when he tried to duck a Thakur short ball only for the ball to graze his glove on the way through to wicketkeeper Rishabh Pant.

It prompted a mini-collapse as two runs later debutant Washington Sundar trapped Warner lbw for 48, the Australian opener’s highest score since his return from a groin strain in the third Test in Sydney.

First innings century-maker Marnus Labuschagne came to the crease and continued to attack, blasting five boundaries on his way to a quickfire 25 before he was straightened up by a Siraj delivery and edged a simple catch to Sharma at second slip.

Siraj, who was expensive in his early overs, then had Matthew Wade caught behind down the leg side for a duck three balls later to leave Australia 123 for four.

Smith and Cameron Green then began to take the game away from the visitors, though both had let-offs.

Smith was dropped at long-off by Siraj on 38 while Green survived a caught and bowled by the same bowler on 14.

But Siraj, who took 5-73, made amends when he got one to leap into Smith’s glove with the former Australian captain on 55, while Thakur went on to finish with 4-61 as he accounted for the wickets of Green, Tim Paine and Nathan Lyon.