Siraj was speaking after receiving a hero's welcome in his home city of Hyderabad. 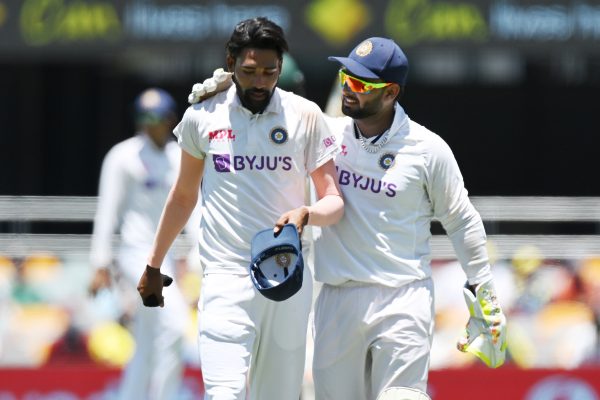 Rishabh Pant of India offers some encouragement to Mohammed Siraj during the fourth Test against Australia. Picture: Getty Images

India bowler Mohammed Siraj has given his first public account of the crowd abuse he suffered during the Australia Test series, saying it made him “mentally strong”.

Siraj said India, who stunned Australia to win the series 2-1, declined an offer from the umpires to walk off the field as players were abused in the third Test in Sydney.

According to Indian media, shouts of “monkey” and other insults rang out when Siraj and fellow fast bowler Jasprit Bumrah were fielding near the boundary.

“The crowd in Australia began to abuse me but it made me mentally strong. I did not let it affect my game and that was important,” said Siraj.

“I told my captain Ajju bhai (Ajinkya Rahane) about the abuse and he spoke to the umpires who said you can leave the field. But Rahane said: ‘We will play on.'”

He said Rahane told the umpires to take action over the abuse. Six fans were ejected and an investigation into the incident is underway.

India, despite being decimated by injuries, battled to a draw in Sydney and then broke Australia’s 32-year unbeaten streak at Brisbane’s Gabba ground to claim one of the great series victories of all time.

Siraj, still grieving his father, who died just before the series, took 13 wickets including five in Australia’s second innings at the Gabba, just his third Test.

He was speaking after receiving a hero’s welcome in his home city of Hyderabad on Thursday, where he headed straight for his father’s grave.

Siraj’s father, an auto rickshaw driver, died as India were in quarantine in Australia, but the player decided to stay with the team.

“First of all it was very difficult for me. Mentally I was upset and depressed,” he said.

“I had a chat with them back home and they said that I should complete Dad’s dream (of playing for India).”

Siraj has emerged as a national player after becoming a key man for Indian Premier League side Royal Challengers Bangalore, who are led by India’s regular captain Virat Kohli.

“I had a bad season in 2018, but RCB backed me. Virat bhai has always backed me, saying ‘You have the power and you can do it’,” he said.

“I will not let this performance go to my head. I cannot relax as there is the England series and the World Test Championship coming up.”

India, now the world’s top Test nation, are virtually assured of a place in the world Test final at Lord’s in June.