The Crusaders won last year's New Zealand competition at a canter - adding to the record 10 Super Rugby titles already in their trophy cabinet. 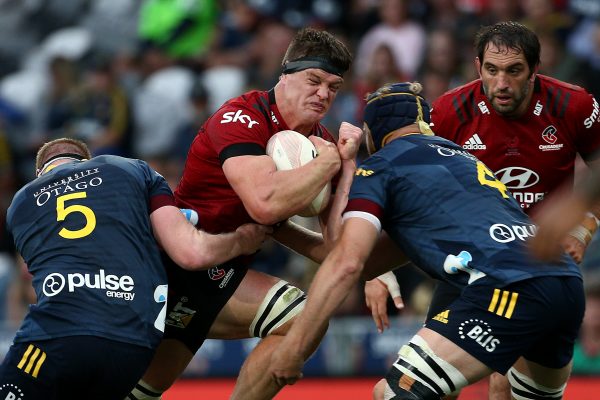 Scott Barrett of the Crusaders is tackled by Josh Dickson of the Highlanders during the round one Super Rugby Aotearoa match in Dunedin on Friday. The Crusaders won the opener. Picture: Getty Images

The Crusaders scored four tries to two, finishing strongly in a physical clash that kicked off the season at a frantic pace.

“We knew the Highlanders were going to take us on up front and we had to match that, if not beat it, to win,” captain Scott Barrett said.

“I think we did alright in that area.”

The Crusaders won last year’s New Zealand competition at a canter – adding to the record 10 Super Rugby titles already in their trophy cabinet – and are short-priced favourites to repeat the feat this year.

Highlanders’ co-captain Aaron Smith said the margin between the two teams was tight but the Crusaders had an edge in critical areas.

“Our skill level definitely let us down, letting them off at key moments when they just pounced,” he said.

“It was a ding-dong battle there for 60-odd minutes but their set pieces are too strong and we just didn’t nail our chances.”

The match started at a high tempo in front of a raucous crowd, with the fired-up Crusaders conceding two penalties in the first two minutes.

The unrelenting pressure from the defending champions yielded two quick tries, the first from a line-breaking run by hooker Codie Taylor in the 13th minute.

Bryn Hall scored the second when he latched onto a ball neatly kicked into the mid-field from Sevu Reece on the wing.

The Crusaders were then reduced to 14 men when Ethan Blackadder was sin-binned after repeated offside infringements.

The advantage paid dividends as the Highlanders’ scrum finally began to click, setting up flanker Shannon Frizell to dot down in the corner.

They maintained momentum with another five-pointer when Connor Garden-Bachop raced down the wing, narrowing the deficit to 14-10 at half-time.

A Highlanders penalty immediately after the restart made it 14-13 before winger Sevu Reece extended the Crusaders lead with a sensational finish while under pressure from prop Siate Tokolah.

As Tokolah was bundling him over the line, Reece reached out with one hand to ground the ball, managing to avoid his foot being pushed into touch at the same time.

A pushover try to Brodie McAlister in the 72nd minute sealed the win for the Crusaders.