Oosthuizen, who has five major runner-up finishes since his British Open victory 11 years ago, made an incredible closing shot at the par-5 18th. 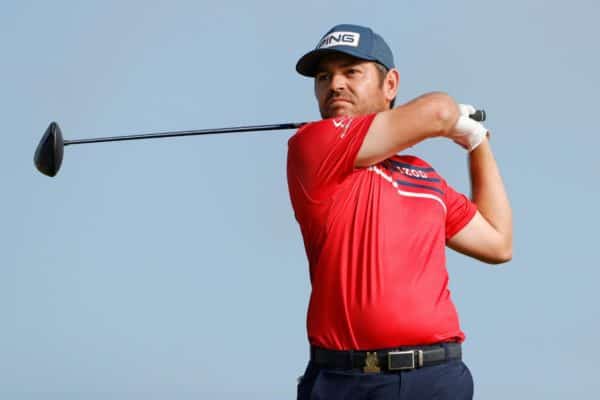 Louis Oosthuizen tees off during the third round of the US Open. Picture: Getty Images

South Africa’s Louis Oosthuizen closed with a stunning 52-foot eagle putt to grab a share of the lead with Canada’s Mackenzie Hughes and American Russell Henley after Saturday’s dramatic third round of the US Open.

Four-time major winner Rory McIlroy and defending champion Bryson DeChambeau shared fourth on 210, charging into contention to set the stage for an intense final round.

“There are a lot of great players up there that have a chance of winning this,” Oosthuizen said. “I just need to go out and play as good as I can.

After sinking a 30-foot birdie putt at the par-3 16th, Oosthuizen — who has five major runner-up finishes since his win 11 years ago at St. Andrews — made his incredible closer at the par-5 18th.

“I was talking too it to slow down a little bit,” Oosthuizen said. “It was a good line and good speed.”

Another ???? has landed on a major Saturday at @GolfTorrey’s finishing hole!@Louis57TM is tied for the lead heading into #USOpen Sunday. pic.twitter.com/mmOL8Ntkb1

On a day of electric shotmaking, Hughes sank a 63-foot eagle putt at the par-5 13th and blasted out of a bunker to five feet to set up a birdie at 18.

Hughes, who missed the cut in his past five PGA events and six of his eight prior major starts, won his only US PGA title in 2016 at Sea Island.

“I know I’m going to be nervous tomorrow,” Hughes said. “I’m going to try and enjoy it lots and embrace the moment.”

A crowd limited to about 8,000 people by Covid-19 safety measures roared when Hughes knocked in his eagle.

“I loved it,” he said. “The charge when it goes in the hole and the crowd erupts is why we play. It gives me goosebumps just thinking about it.”

Journeyman Henley blasted in a 22-yard bunker shot for birdie at the par-3 11th and saved par from a bunker at 18 to share the lead.

“Tied for the lead going into the last day of a major, you never know,” Henley said. “I’m excited. You always wonder what it would feel like to be in contention.”

ALSO READ: Bland, Henley share US Open lead with Oosthuizen one back

McIlroy birdied three of the first four holes on the back nine, including a spectacular 32-yard chip-in birdie at the 12th.

He salvaged bogey after finding an oceanside canyon off the tee at 15, saved par from a bunker at 16 at seven feet at 17 and tapped in for a closing birdie.

“It’s one of the best rounds of golf I’ve played in a while,” McIlroy said.

McIlroy snapped an 18-month win drought last month on Mother’s Day and could end his major win drought on his first Father’s Day since the birth of first child Poppy last year.

“I’m just excited for the opportunity to have a chance and be in one of the final groups,” McIlroy said.

DeChambeau shot 68 in the first bogey-free major round of his career, sinking seven-foot birdie putts at the first and sixth and an eight-footer at the par-5 13th.

“It’s great. It means my game is in a pretty decent spot,” DeChambeau said. “I stepped up and felt really comfortable out there… I gave myself a great chance tomorrow.”

World number three Jon Rahm of Spain, who spent last week in Covid-19 quarantine, fired a 72 to share sixth on 211 with Americans Scottie Scheffler and 2020 US Open runner-up Matthew Wolff, who is returning from a two-month mental health hiatus.

“I felt like I grinded pretty good and kept the scores as low as possible to give myself a good chance going into tomorrow,” Wolff said.

Rahm spent most of last week in quarantine after contracting Covid-19.

“I’m confident about tomorrow,” Rahm said. “There will be somebody who gets a fast start, and hopefully that’s me.”

England’s Richard Bland, a 36-hole co-leader with Henley trying at 48 to become the oldest US Open champion, fell back with a 77 to stand on 214.

Bland, playing in only his fourth major, won his first European Tour title at last month’s British Masters after 478 starts over 25 years.

Phil Mickelson, a six-time US Open runner-up who turned 51 Wednesday, staggered to a 76 to end his dream of a win to complete a career Grand Slam.

The American left-hander made five bogeys and a double bogey to finish on 220.

“I just completely lost it today,” said Mickelson. “I just kind of lost the swing and I really struggled.”