For the second time in four days, the tourists proved too strong for Sean Everitt's Sharks. 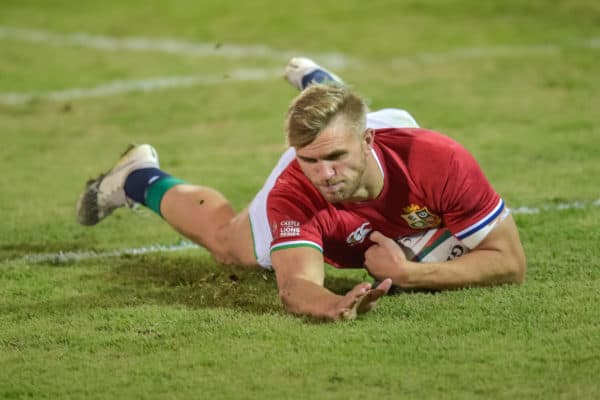 Chris Harris of the British and Irish Lions scores a try against the Sharks in a tour match in Pretoria on Saturday. Picture: Christiaan Kotze/Gallo Images

The frustration of red cards ruining thrilling rugby matches was once again to the fore as the British and Irish Lions hammered the Sharks 71-31 at Loftus Versfeld on Saturday night, the match turning into a one-sided affair after Sharks scrumhalf Jaden Hendrikse was sent off for a moment of madness.

The Sharks had produced a ferocious response to their drubbing in midweek in their first meeting with the Lions, and at 26-26 after a dazzling first half, the stage was set for a marvellous second half.

But then five minutes after the break, Hendrikse, who is generally an infuriatingly niggly scrumhalf to play against, crossed the line by hitting a Lions player on the back of the head with his elbow. Referee Wayne Barnes quite rightly red-carded him and that was the end of the contest.

The Sharks, so valiant and determined in the first 40 minutes, had the stuffing knocked out of them as the Lions roared their way to seven more tries in the second half. Hooker Jamie George, flank Tadhg Beirne and wing Anthony Watson, who showed why everyone in the UK raves about him, all came away with braces.

In the first half, the Sharks had rebounded from their mauling in midweek with a superb display of scrambling defence and they were extremely stingy with the amount of space and time they gave the Lions. The tourists, under such determined pressure, showed that they are human as well and the mistakes came.

Wings Anthony Volmink, who scored twice, and Thaakir Abrahams showed their ace finishing skills, while Hendrikse scored a fine intercept try inI the 24th minute and lock Reniel Hugo charged down a kick for outside centre Werner Kok, who again played with great fervour, to score.

The loose trio of Phepsi Buthelezi, Celimpilo Gumede and Dylan Richardson were outstanding for the Sharks.

The second half promised so much but true rugby fans will have hated the mismatch it became. On the bright side, the Sharks showed in the first half that the dominance of the Lions and the shackles they impose can be broken.