The Olympic silver medallist launched a massive 8.46m leap to open his season with a bang. 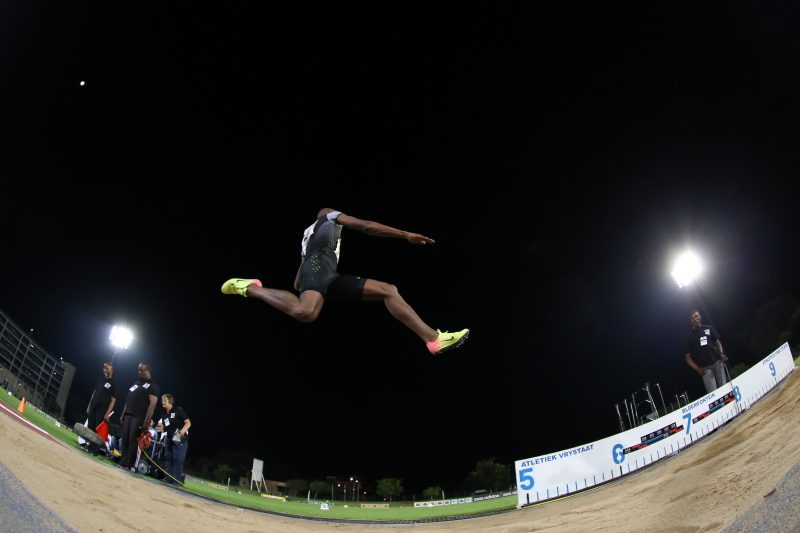 Luvo Manyonga produced the best performance of the evening on Wednesay night, while spectators and athletes were let down by a faulty timing system at the second leg of the ASA Speed Series in Bloemfontein.

With his final attempt, he jumped 8.72m, but overstepped the barrier and the effort was recorded as a no-jump.

“I was going for the kill today. I felt it with my first jump,” Manyonga said.

“I wanted the SA record, and I didn’t get it, but that happens.”

The athletes were offered a re-run, but with many of them also having competed in relay races at the meeting, they turned down the offer.

Leotlela was given a hand-timed result of 10.00 seconds, with Van Niekerk edging out Emile Erasmus in 10.10. While Ruan de Vries clocked 13.23 to win the men’s 110m hurdles, clipping 0.01 off Lehann Fourie’s national record, the performance was unlikely to be considered for record purposes due to the technical fault.

Even de Vries, who set his personal best of 13.59 in Potchefstroom four years ago, did not believe he had run that quick.

“I hit a few hurdles, so it’s a fast time but there’s nothing I can do about it now. I’m a bit shell-shocked, and I don’t know what to say. In the women’s 100m hurdles contest, resurgent athlete Rikenette Steenkamp continued her comeback from a lengthy injury hiatus, securing victory in 13.09 to clip 0.07 off her three-year-old personal best.

Athletics SA president Aleck Skhosana said the performances at the meeting could not be scrapped as official times until the federation followed the ratification process.

“We can’t discredit the athletes until we know whether there was an issue with any of the times,” Skhosana said.