The duo show their firepower as they tear through the Bangladesh batting order despite the absence of Morne Morkel. 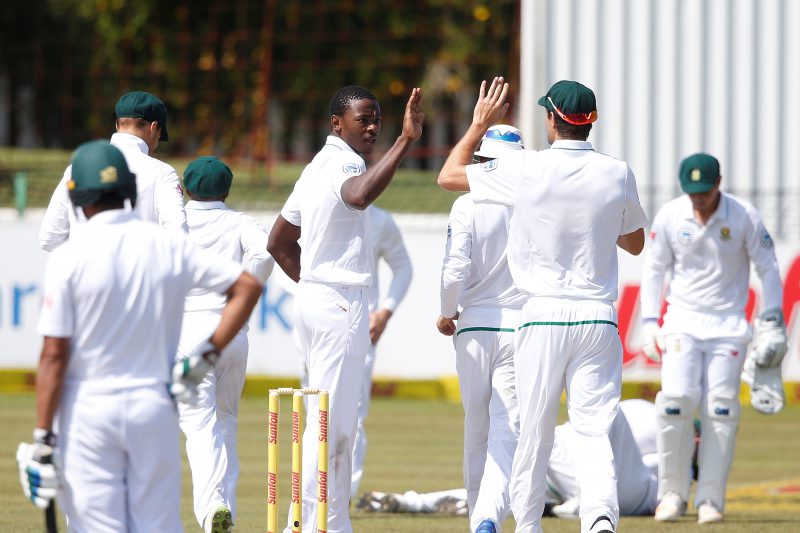 Kagiso Rabada was in a devastating mood for the Proteas. Photo: Gianluigi Guercia/AFP.

When the Proteas look back on their victory in the first Test against Bangladesh in Potchefstroom, they’ll wonder what it actually all meant.

Maybe Monday’s victory by a massive 333 runs was exactly what was needed, a gentle introduction for new coach Ottis Gibson.

For the visitors it was a return to the dark old days, when they were punished with alarming regularity.

Collapsing to 90 all out in their second innings is not a fair reflection of how they’ve improved over the last two years.

Nonetheless, it still raises doubts over how competitive this preparation will be for South Africa with India arriving in the new year.

It was really all too easy.

Kagiso Rabada struck in the second over of the day when he got a delivery to lift viciously, which Bangladesh captain Mushfiqur Rahim could only fend to slip.

The exciting Proteas quick was in the thick of things again when he had Mahmudullah chopping on before producing an inswinger that trapped Lithon Das plumb in front.

That said, Das didn’t help his own cause by leaving the delivery.

Rabada eventually finished with figures of 3/33, a welcome return to form after a slow start to the new season.

The star of the show though was Keshav Maharaj, who continues to show immense potential as a frontline spinner.

It was expected that a wearing Potch pitch would start to turn and the left-arm spinner didn’t disappoint.

His variations were really clever.

Sabbir Rahman was LBW to a full and straight ball while Taskin Ahmed fell to a delivery outside off that spun back sharply.

Meanwhile, Morne Morkel is likely to be out of action for about six weeks because of a side strain, team manager and doctor Mohammed Moosajee said on Monday, reports AFP.

Moosajee was speaking shortly before South Africa wrapped up victory in the first Test against Bangladesh, the first of a scheduled ten Tests during the home season.

He said Morkel would have scans on Monday but a preliminary assessment was that he was likely to need six weeks of rest.