The Proteas make an interesting choice in trying to replace the injured Faf du Plessis for the rest of the ODI series against Sri Lanka. 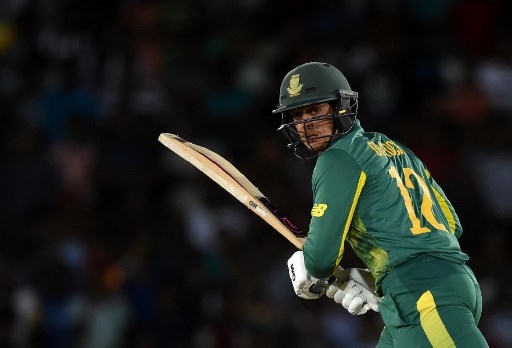 Captaincy is not something associated with Quinton de Kock but it’s the responsibility given to him for the rest of Proteas’ ODI series against Sri Lanka.

The 25-year-old will deputised for Faf du Plessis in the final two games after sustaining a shoulder injury.

It’s certainly an intriguing move by national coach Ottis Gibson though it’s not expected to be a precursor to a more permanent role in the future.

“It is about trying to grow the team and growing the leaders within the team,” said Gibson on Tuesday.

Aiden Markram had previously stood in for Du Plessis in the series against India earlier this year but his own poor form means he first needs to get his own game in order.

“Aiden captained against India and he is not currently in the team, he has had some struggles on this Sri Lanka tour so far. We thought we would have a look at Quinton for the next two games, which will give Aiden time to settle himself,” said Gibson.

De Kock isn’t a complete novice when it comes to being skipper.

He led the national Under-19 side in 2012 and has clearly shown potential within the current setup.

“I have always found Quinton to have a good cricket brain, he understands the game,” said Gibson.

“It seems like a good opportunity and chance for him to show that side of his game as a leader for the next two games. He is constantly helping the captain on the field, he shows good leadership on the field even as a normal player.”

“I will try to stay true to myself and stay true to what I believe it takes to be a good leader. I will strive to help others going forward, just to be there as a captain.”

JP Duminy will captain the T20 side.