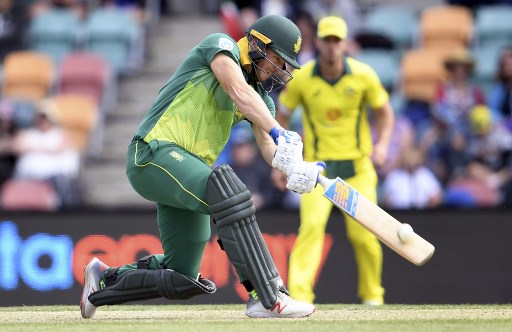 South Africa's batsman David Miller hits a six from the bowling of Australia's Adam Zampa during the third one-day international cricket match in Hobart on November 11, 2018. (Photo by WILLIAM WEST / AFP) / -- IMAGE RESTRICTED TO EDITORIAL USE - STRICTLY NO COMMERCIAL USE --

The Proteas’ batting fired at the most opportune time to secure an ODI series victory over Australia on Sunday.

To be honest though, it was rather their most experienced pair of batters that did so.

Captain Faf du Plessis and David Miller shared a magnificent fourth-wicket stand of 252 that laid the platform for the 40-run win, in the process also recording the biggest partnership for any wicket between the two old foes.

A highlight was how the pair capitalised gradually on let-offs as well as a sticky start.

Du Plessis was dropped on 29, while Miller was perhaps a tad fortunate with his DRS review.

The left-hander, on 41, was struck in front by the off-spin of Glenn Maxwell and seemingly seemed convinced that going upstairs would be a wasteful exercise.

But Du Plessis eventually indicated for the review though he was reminded that technically Miller had to provide the signal.

He almost reluctantly did so and, if one was to be pedantic, actually missed the 15-second deadline.

The replay showed the ball was going over the stumps.

Granted a reprieve, the pair flourished.

Du Plessis was skillful and precise in making his 125 off just 114 deliveries, a contrast to the powerful Miller, who crunched four sixes and 13 fours in his 108-ball 139.

Faced with a daunting target of 321, the fragile Australian batting once again started poorly as Dale Steyn and Kagiso Rabada reduced them to 39/3.

However, Shaun Marsh and Marcus Stoinis approached their stand similarly to the Protea heroes and looked set to take the game firmly away from the visitors before Stoinis bafflingly cut a rank long hop from Dwaine Pretorius (2/61) straight to point.

The classy Marsh silkily moved on to a superb 106 off 102, but struggled to find his fifth gear.

In fact, that was the theme of the hosts’ latter stages of the innings as the outstanding duo of Steyn (3/45) and Rabada (3/40) returned to snuffle out their hopes.