Will the ODI series against the Aussies prove to be the springboard that shifts him from good to world-class batsman? 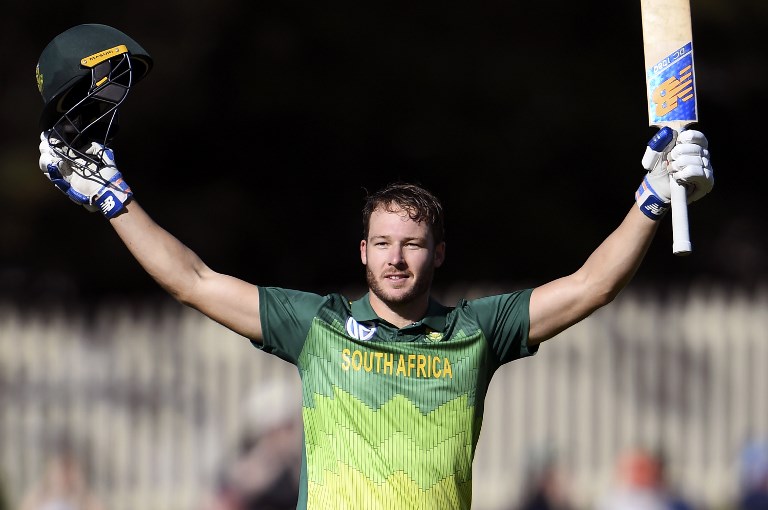 South Africa's batsman David Miller celebrates his century against Australia during the third one-day international cricket match in Hobart on November 11, 2018. (Photo by WILLIAM WEST / AFP) / -- IMAGE RESTRICTED TO EDITORIAL USE - STRICTLY NO COMMERCIAL USE -- / The erroneous mention[s] appearing in the metadata of this photo by WILLIAM WEST has been modified in AFP systems in the following manner: [ADDS RESRTICTIONS - IMAGE RESTRICTED TO EDITORIAL USE - STRICTLY NO COMMERCIAL USE ]. Please immediately remove the erroneous mention[s] from all your online services and delete it (them) from your servers. If you have been authorized by AFP to distribute it (them) to third parties, please ensure that the same actions are carried out by them. Failure to promptly comply with these instructions will entail liability on your part for any continued or post notification usage. Therefore we thank you very much for all your attention and prompt action. We are sorry for the inconvenience this notification may cause and remain at your disposal for any further information you may require.

If David Miller ever chose a best time to showcase his true match-winning potential, his masterful knock in Hobart at the weekend was it.

The explosive left-hander’s brilliant 139, an innings that went a long way towards securing the Proteas’ ODI series victory over the Australians, simply can’t be underestimated in terms of significance.

Firstly, it was constructed in a must-win, series decider against Australia’s best bowling attack.

That in itself is showing a sense of occasion.

AUDIO: Miller and Du Plessis on almost missing a crucial DRS deadline when Miller was given out on 41

More importantly, Miller did so as one of only THREE senior batsmen in the team.

There was no AB de Villiers, JP Duminy or Hashim Amla around.

And with a World Cup looming, but also the high possibility that after the 2019 showpiece he’ll have to take over as full-on senior player, this effort must serve as a springboard.

Skipper Faf du Plessis, with whom he shared a record-breaking 252-run stand, noted how Miller showed his adaptability and class in the series.

“What I like about him is that Dave has different paces to his game,” he said.

“Everyone knows that he has power, he has always shown in the IPL that he has power. What is important in one-day cricket is to have different gears. You can’t come in and play one way, you will be inconsistent. There are a few players who try and go that way and they have shown inconsistency.”

By all accounts, Miller tried exactly to avoid that.

“With Dave it is about understanding his blueprint of how to score runs,” said du Plessis.

“He has done that in two games in a row where he has played cricket shots, it is like playing Test cricket for 15 overs where you make sure you get into your positions, he did that really well.

“When he gets through that he has 10-15 overs at the end, he is up there with the best when it comes to clearing the rope.”