Proteas hang on after another dreary batting effort 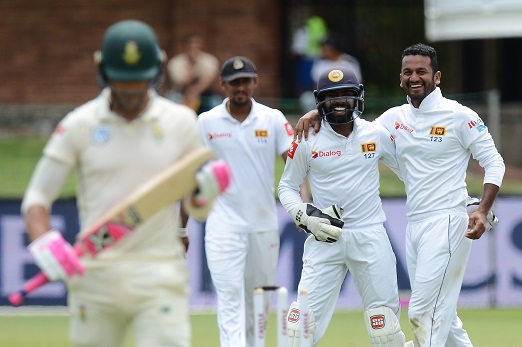 The Proteas’ pace attack once again had to bail out their batsmen in the second Test against Sri Lanka in Port Elizabeth on Thursday.

Even that bowling effort was a bit of a last gasp effort.

Rabada (1/14) and Dale Steyn had initially struggled to dislodge the dogged Sri Lankan opening pair of Dimuth Karunaratne and Lahiru Thirimanne, possibly trying too hard on a grassy surface.

But then Rabada adapted his line and moved the ball away just a bit to get Karunaratne’s edge.

Olivier then hurried Oshada Fernando for pace as he chopped on and exploited the attacking nature of Kusal Mendis, luring him with a good length ball after the diminutive batter had hit him for four three deliveries earlier.

However, the fightback with the ball couldn’t mask yet another poor effort with the bat, which wasn’t helped by Faf du Plessis’ eyebrow-raising decision to bat first.

Dean Elgar and Hashim Amla dealt woefully with Vishwa Fernando’s movement as they were both castled.

For Amla, it was a particularly chastening experience as he made the first golden duck of his international career.

That will only heighten speculation that this is his last Test for the Proteas before retiring.

Temba Bavuma bafflingly ran himself out to leave the South Africans 15/3 and Du Plessis (25), after battling reasonably well to lunch, was bowled by the occasional spin of Karunaratne.

After lunch it was Kasun Rajitha’s turn to exploit conditions as his burst ripped out Aiden Markram, who showed class in making 60, debutant Wiaan Mulder (9) and Keshav Maharaj, reducing the Proteas to 157/7.

They were partly saved by the magnificent Quinton de Kock, who continued his outstanding form in crafting another skillfully attacking 86 off just 87 deliveries.

He stroked 12 boundaries and found a good ally in Kagiso Rabada.

Once that useful stand was broken though, the tail subsided badly.